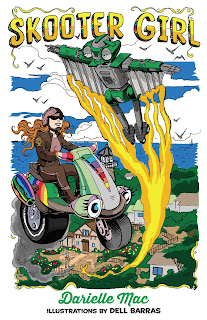 “Usually when we see women in film or books, they are portrayed as hard and usually shooting guns. I wanted Amber to be something different. It’s not that we women aren’t powerful, but we don’t have to turn into men and pick up a gun to fight,” says Mac.

“SKOOTER GIRL is an exhilarating new graphic novel ... The title character is Amber, (think Wonder Woman on a robotic motorcycle) who joins a cascade of colorful characters and fantasy situations on her spectacular journey. Sparkling and exciting and insightful on every level! A winner here – entertaining, sensitive, fanciful, and solidly developed thoughts on family and the meaning of relationships.”

Mac brings a lot of her own personal experiences to her story. Having grown up with a scientist father who worked for the World Health Organization, Mac lived around the world and speaks many languages. From her Harvard-educated mother who “teaches teachers to teach,” Mac knows how to present her material in a matter that enlightens as well as entertains, leaving the audience wanting more. Drawing on her years as an environmental activist, her story touches on saving the planet and our resources without being preachy.

This fantasy/adventure story starts off as Amber turns sixteen, which makes her an adult in her culture in the magical island of Tir na Nor. Her father has taught her well since her mother disappeared, and Amber plays the violin, has a healing touch, and is gifted in many ways. “Seashells, enchanted to life, danced behind her as she ran…” But when she is told who she must marry, she leaves home. Riding her magical scooter, and surrounded first by selkies and then a robot, Amber leads readers on a magical adventure with many surprising turns. The story is strong on rebuilding family relationships and refreshingly absent of the sexual undertones that fill most teen stories today.

“I am trying to tell stories of the earth for a global audience and also empowering women and girls to be the leader and heroes in these stories that heal the planet and heal one another,” says Mac, who has worked hard on portraying strong family relationships in the storyline. “In this world right now, we need a little touchy-feely. There’s a lot of anger out there.”

“Fraught with incredible suspense and danger, this debut by Darielle Mac is both highly accessible and wonderfully conjured. “Skooter Girl” is guaranteed to blow your mind and speed you away.”
-- John J. Kelly, Detroit Free Press
Hoping to give women more roles in the Skooter Girl film which is in development, Mac is looking for a female director and also hired a female artist to conceptualize the characters before she published the graphic novel. Mac is an international playwright and screenwriter who has worked with the likes of Rachel Rosenthal, Peter Brook, Tandeusz Kantor and Ping Chong. She cut her teeth in the experimental theatre of New York and then went on to create original works in the Bay area, Europe and southwestern United States.  She brings her experiences and vision to the soon-to-be-released film of Skooter Girl.

About Darielle Mac: Darielle Mac has written primarily for theatre and film and worked with many great names in the business. She is also a veteran of La Mama and the Performance Garage in New York. In her “other life” she champions causes for humanity and saving the earth’s resources. Marrying those two passions, she wrote Skooter Girl, a graphic novel and her first book for YA readers. The idea originally emerged as a screenplay and is currently being developed into a feature film. Like her other screenplays, Skooter Girl targets a family demographic, focusing on stories about the Earth.


The idea for Skooter Girl came from an inventor gifting the author a prototype, electric scooter to ride when she arrived back in the US after traveling around the globe. Her personal adventures scooting roadways, and the country inspired the story.

When she is not writing, Mac spends her time as a falconer, a gardener, and loves running, biking, sailing and spending time with her dogs. She divides her time between the Southwest United States, France and Los Angeles.