10 Books You And Your Kids Will Love 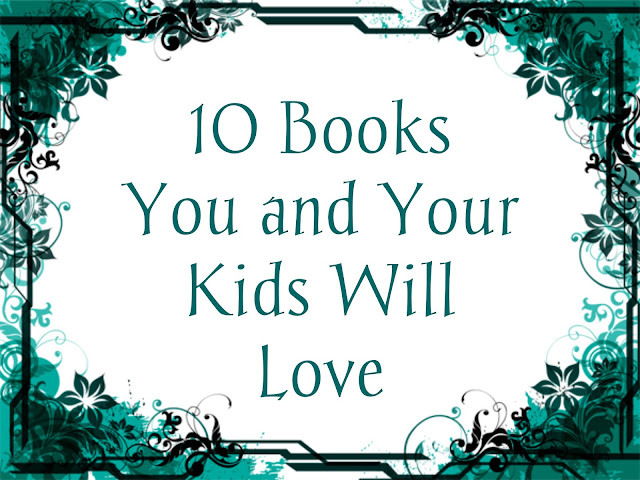 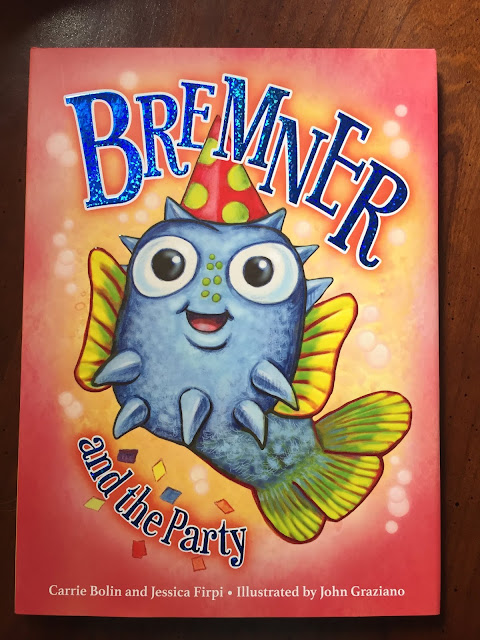 Bremner and The Party by Carrie Bolin and Jessica Firpi. Illustrated by John Graziano


Brand new picture books from Ripley’s feature fun and engaging stories around two favorite Ripley’s Aquarium mascots-Sharkee the sand tiger shark and Bremner the pufferfish. Filled with expressive illustrations, silly situations, and lovable characters, kids and parents alike will be enchanted by each of these charming “tails”! 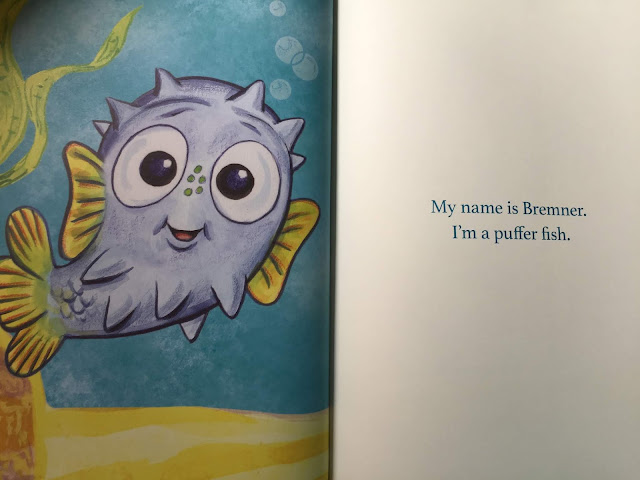 Bremner the pufferfish is going to a party. Tonight. Gulp! And he’s nervous. And he knows what happens when he gets nervous. He puffs up. And he definitely doesn’t want to puff up. Children and parents alike will laugh their way through Bremner’s nervous dialogue as he goes off the deep end before joining the party. Will Bremner puff up and ruin the celebration? There’s only one way to find out! 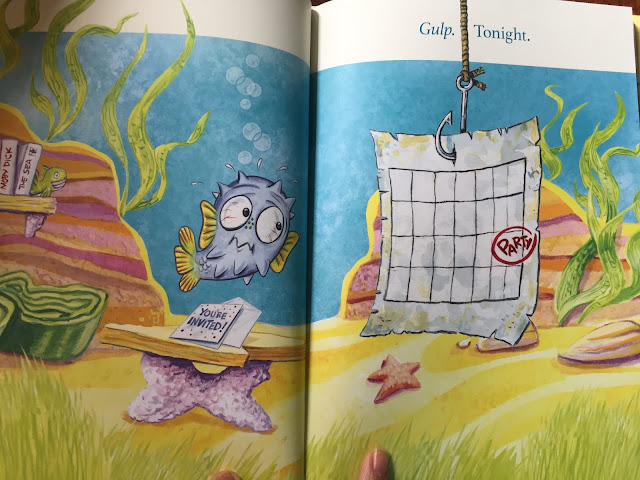 CUTE! Bremner is a puffer fish who is invited to a party. He is so nervous and worried that he will puff up but when he gets there he finds that everyone else is just as nervous and ends up having a wonderful time. 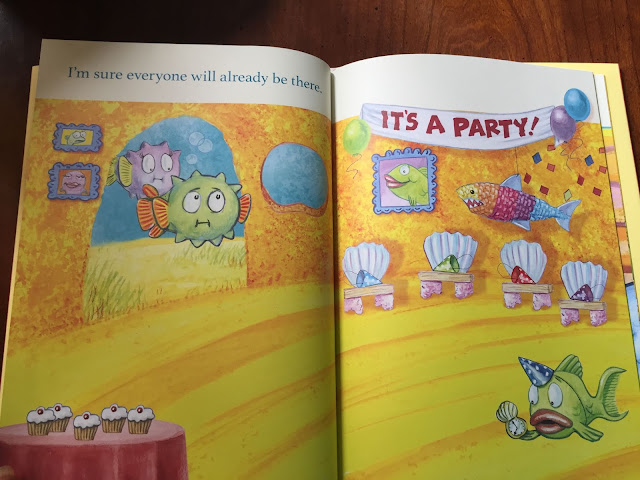 The story is played out mostly in illustration with very large colorful, full page illustrations and one sentence per page. Kids will love it. It is funny and whimsical and they can see how we are all nervous which hopefully will help them not be so nervous.

Sharkee and The Teddy Bear by Carrie Bolin and Jessica Firpi. Illustrated by John Graziano

Brand new picture books from Ripley’s feature fun and engaging stories around two favorite Ripley’s Aquarium mascots-Sharkee the sand tiger shark and Bremner the pufferfish. Filled with expressive illustrations, silly situations, and lovable characters, kids and parents alike will be enchanted by each of these charming “tails”! 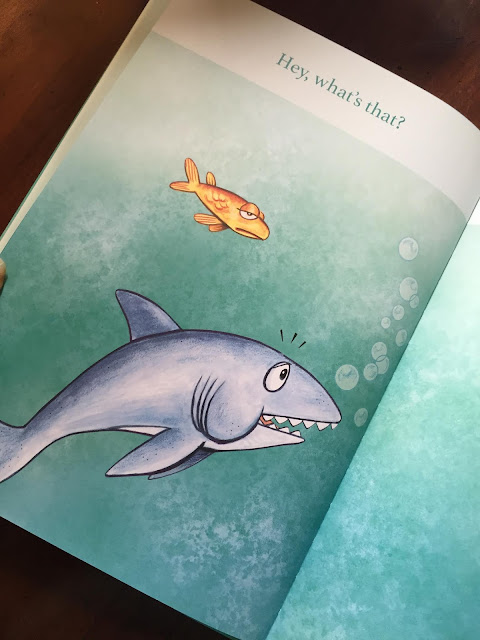 A teddy bear has fallen into the ocean, but there were witnesses. And they want the teddy bear. Join Sharkee and his sassy sidekick as they search for the bear, stopping to ask all sorts of marine animals along the way with varying degrees of silliness. Told from Sharkee’s point of view, this bubbly tail will have young readers giggling at Sharkee’s hilarious encounters and parents entertained by the adorable ending. Will Sharkee ever find the teddy bear? There’s only one way to find out! 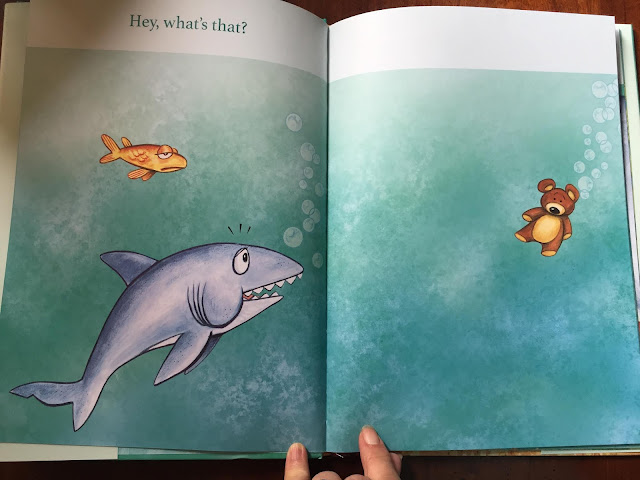 A very cute tale about a shark who suddenly feels he needs a teddy bear when he spots one fall into the ocean. He heads out to find it. No one seems to be able to help or isn't talking. When he finally spots it someone else has decided it is their lovey. Well Sharkee has a way for everyone to be a winner. Kids and adults will love the ending.

Before Mac Barnett was an author, he was a kid. And while he was a kid, he was a spy. Not just any spy. But a spy...for the Queen of England.

James Bond meets Diary of a Wimpy Kid with this groundbreaking new fully-illustrated chapter book series Mac B., Kid Spy. The precious Crown Jewels have been stolen, and there's only one person who can help the Queen of England: her newest secret agent, Mac B. Mac travels around the globe in search of the stolen treasure...but will he find it in time?

From secret identities to Karate hijinks, this fast-paced, witty and historically inspired chapter book will keep readers guessing until the very last page. With full-color illustrations and fascinating historical facts masterfully sprinkled throughout, this series offers adventure, intrigue, absurdity, history and humor. Discover this totally smart and side-splittingly funny new series, and experience what it's really like to be a kid spy.

I think reluctant readers will love this book. I LOVE how the use of The Game Boy was used in the story. My son never played a Game Boy but books about video games have become favorites. My son intends on reading this book next month and I think he will love the silliness. It reads great out loud.  He is going to learn about "the crown jewels", "The President of France", "Arc de Triomphe, "The Louvre" and more while taking the reader on a mystery adventure. I hope he wants to read it together. I want to see if we can turn it into an interest in history and the arts by digging deeper. He does that when we read together.

Sherlock Holmes and the Disappearing Diamond by Sam Hearn


John Watson has barely settled into his new school, Baker Street Academy, when his teacher announces a trip to one of London's top museums, home to the Alpine Star, the world's most famous jewel. But the gem has been stolen! The police are soon on the trail and the whole of the country is talking about the crime. When police catch the thief along with the stolen gem, it seems the case is closed. But Sherlock Holmes has other ideas. With John and Martha at his side, can he uncover the mystery behind this extraordinary gem? 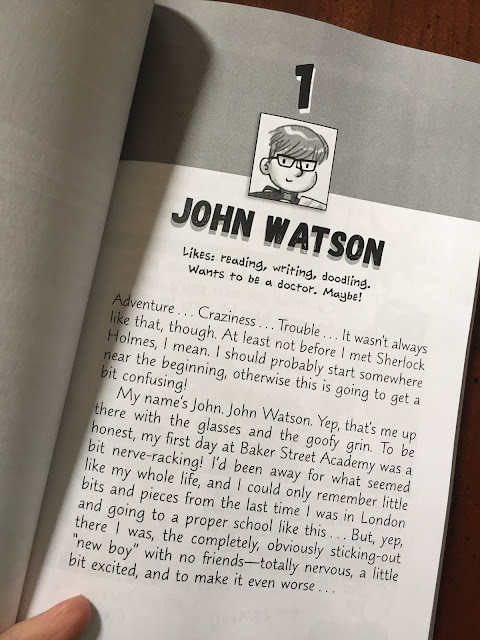 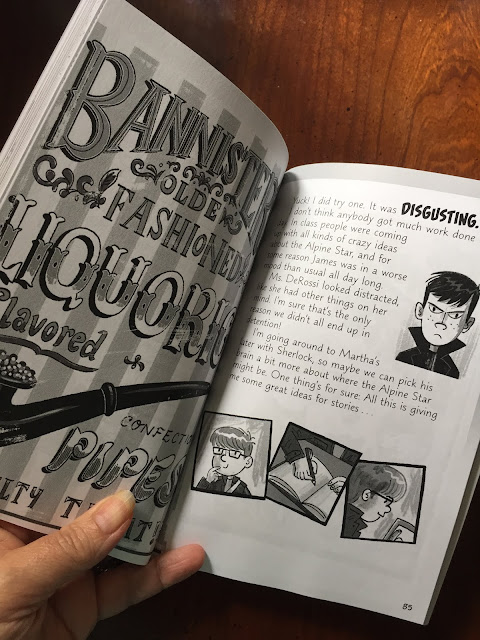 This is the perfect read for those reluctant readers. It has a fun layout with illustrations, bold typeface, word bubbles and small blocks of text. This is on deck for my son's next read. I cannot wait to read it with him. 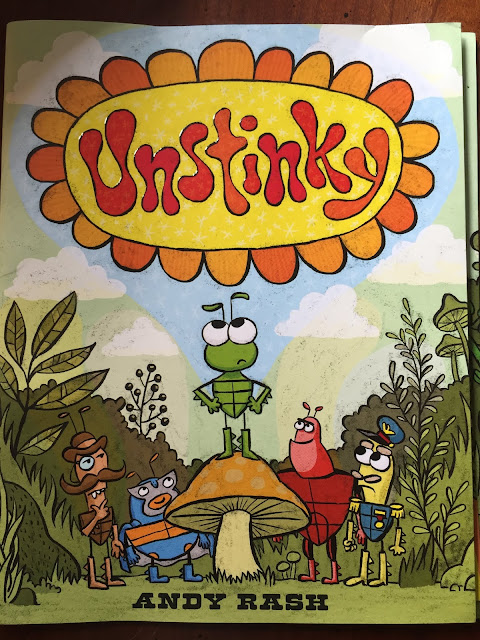 Andy Rash brings the laughs in this humorous story of a stinkbug who can't stink. 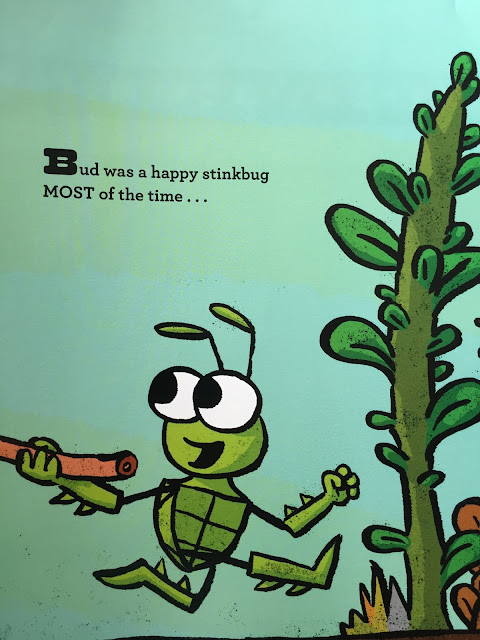 Bud is a happy stinkbug, except when it comes to stinking contests.He always seems to lose to champions like P. U. Bottoms, Lord Stinkington, and The Fumigator. Every time they make smells like OUTHOUSE, GYM SOCK, and ARMPIT, poor Bud ends up smelling like FLOWERS, or FRESH-BAKED BREAD, or CANDY CANE. Stinking just isn't Bud's THING. But what IS his thing? 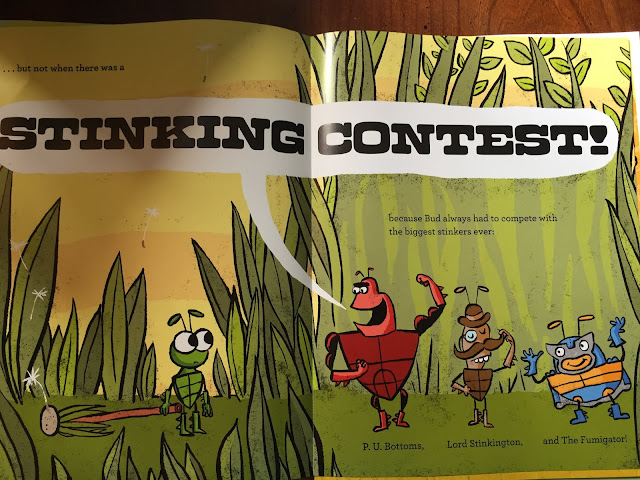 OK...I love, love, love this book. Bud is a stink bug that just can't stink. He is just plain ole' bad at it. During the stink bug contests he always comes in last smelling like flowers, fresh baked bread and more. One day he meets April a Bee who thought she smelled flowers. When April invites Bud to a dance he finds out that dancing is his thing. He is really good at it and when he dances, he smells like a huge bouquet of flowers. The bees love him! 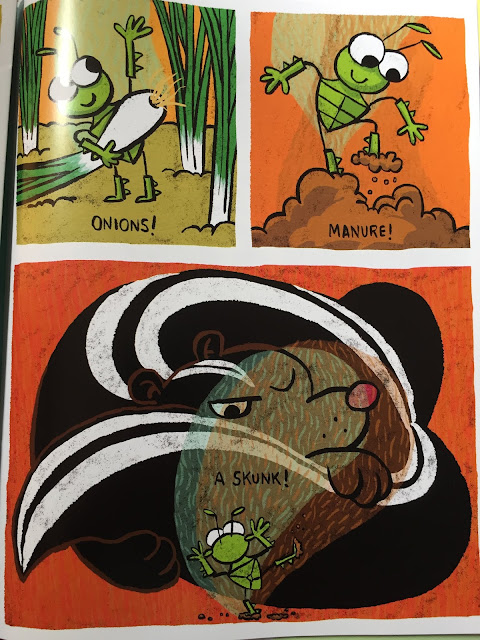 Moral: Be good at whatever you are good at! We are all different and that is OK! 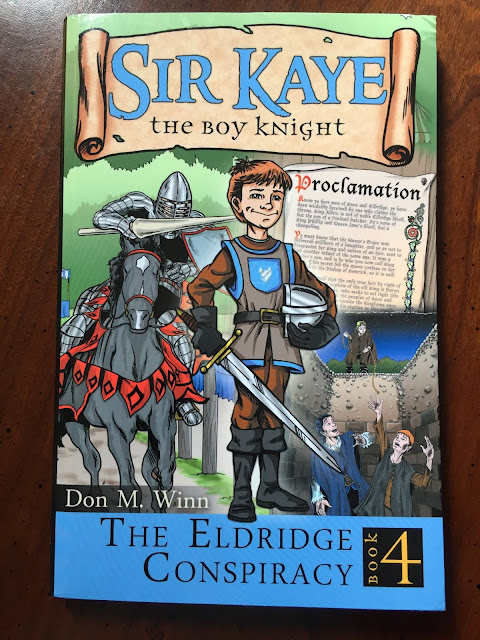 
Kaye’s father is in danger! The young Knight, Kaye, and his friends Reggie, and Beau enter Eldridge in search of the only man who can save his father.  During their journey they encounter and make a powerful enemy of Baron Thomas—the self-proclaimed heir to the throne of Eldridge—who also has his sights set on ruling the country of Knox. Together, the boys dodge the baron’s henchmen and race against time to stop an assassination that would plunge the two kingdoms into war in this exciting conclusion to the series.

I didn't read book 1-3 yet and quickly breezed through book 4 because I really want to read it with my kids over the summer especially since there is a lesson plan with it.


Will Sheep Sleep by Hilary Leung 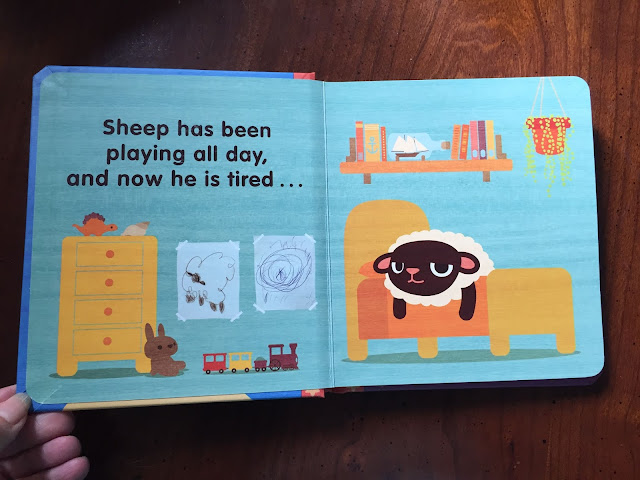 One bed. One sheep. One timeless question: Will Sheep Sleep?

Meet Sheep. Sheep's had a very busy day and now he is tired. . . but will Sheep finally be able to sleep? Find out in this surprising and memorable storybook all about friendship, compromise, and of course, bedtime routines.

A fresh and funny first book in a new series of animal question stories by creative talent Hilary Leung that will keep little ones laughing all the way to bed.

My preschool class loved Will Sheep Sleep probably because they can relate to Sheep.There is so much too do like play with your friends, ask for water, count some sheep, ask for their stuffed animal, and more. Sheep will sleep and so eventually will your kids.

Meet Bear. Bear has so much to give, but will she share? Find out in this surprising and memorable storybook all about friendship, compromise, and of course, sharing. 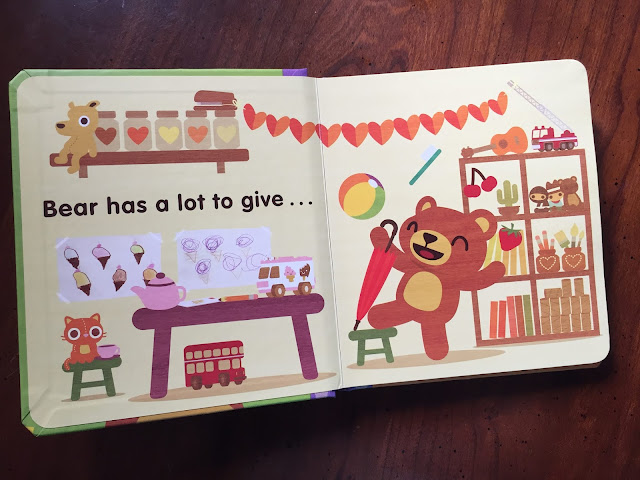 A fresh and funny book in a new series of animal question stories by creative talent Hilary Leung that will keep little ones laughing, and sharing (when it's appropriate!). 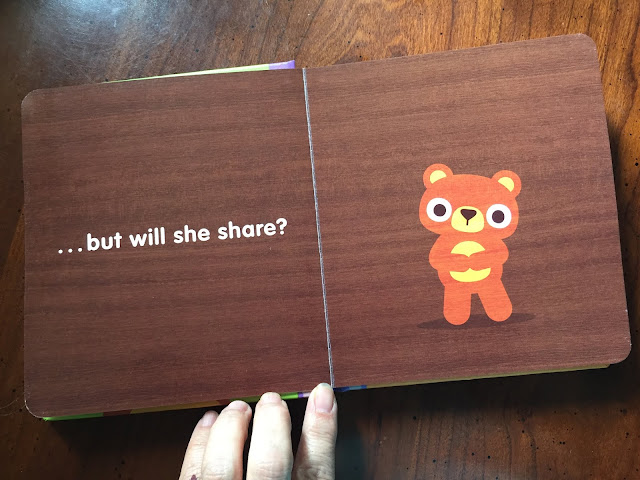 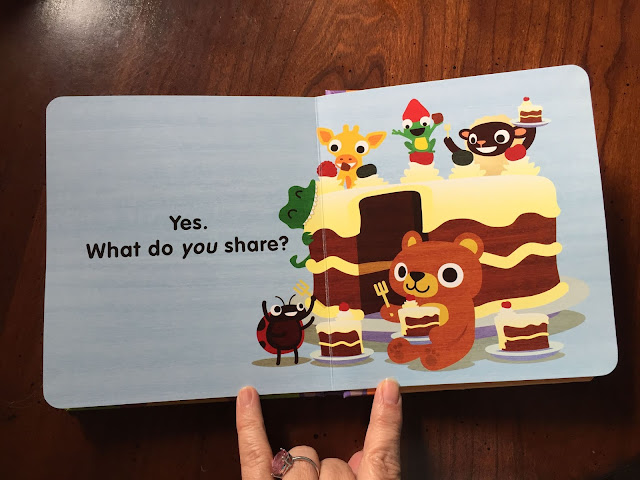 My preschool class loved this book about sharing. We talk about sharing at least 50 times a day. Sharing doesn't come natural to 2 year olds. I loved the illustrations so nice and simple. Will bear share? Yes and No! Adorable book!


Knock Knock by Tammi Sauer and Illustrated by Guy Francis

Knock Knock is a fresh and innovative method of humorous storytelling that uses knock-knock jokes to tell the story of Bear and his woodland friends Raccoon, Rabbit, Turtle, and others. With each new visitor, Bear grows increasingly frustrated at his lack of peace and quiet. Little does Bear know that his friends have a special surprise party in store to wish him well during hibernation! 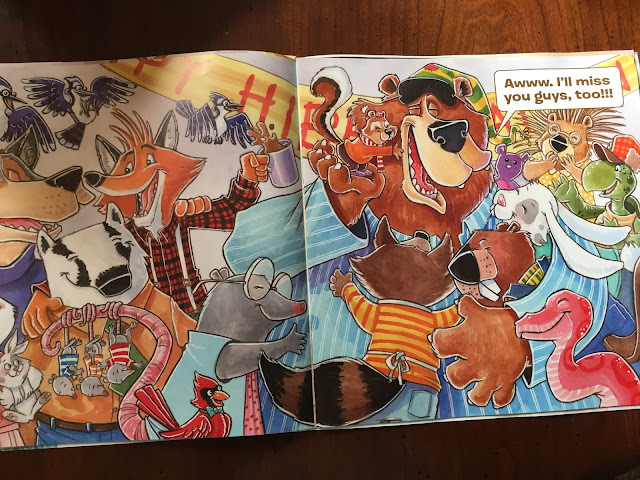 "Knock, knock!" "Who's there?" "Justin." "Justin who?" "Justin the neighborhood and thought I'd stop by."It's sidesplitting storybook fun!

Bear is trying to get some sleep when there is a knock at his door. The next thing you know animals are stopping by one by one to wish bear a happy hibernation. A party ensues and bear finally gets to sleep. When Spring arrives it is bear knocking on doors to great his friends.

A very funny book featuring all kinds of happy friendly animals that kids will love talking about and pointing to.


Orville the penguin lives at the zoo, surrounded by animal pals who go on exciting adventures. A hang gliding rhino! A deep-sea diving giraffe! Orville struggles to keep up, until one day he concocts an adventure all his own: build a spaceship and fly to the moon all by himself. Can one tiny penguin get there alone? 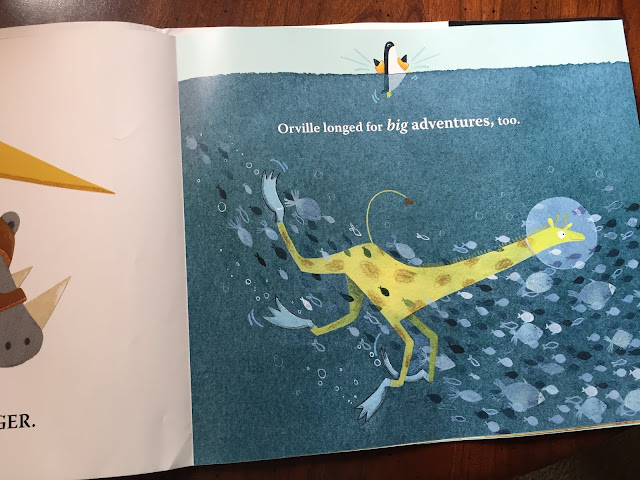 Penguinaut is perfect for every child who's said, "I can do it myself!" and comes to find that the rewards are much richer when shared with friends. Marcie Colleen's playful text and Emma Yarlett's charming, whimsical illustrations are sure to delight both children and their parents.

Orville has a wish. He wants to be like his friends and go on big adventures and he want's to do it all by himself.

Soooo one day he builds a rocket and as the story goes he goes to the moon where he proclaims 'I did it myself" to the dark, quiet moon where he was all alone.  When he heads home his friends are so proud of him and he learns that being together is out of this world.

I loved the illustrations. So cute with whimsical animals with word bubbles over the heads and fun page layouts.

Disclaimer: I received ARCs and Review copies of these books for my honest opinion. All opinions are my own. No monetary compensation was offered or received.