The Bug and Frog Catcher, Catches Like A Pro Thanks To Daddy

My husband is an interesting character. Like his father, he is the 50's dad. Hard working but pretty much absent from the day to day workings of the house, leaving the raising kids part to me (honestly I am better at it and have more patience). He doesn't attend everything they do, nor does he have time to sit and play a board game or have long discussions, taking them to a park or farm isn't "fun" to him BUT when it "really" matters he stands up for his family and is there. I can tell you that from someone who really needed him when I was sick for two years. He is a stand up guy and sometimes he really surprises me. He is wicked smart and always thinking. He is the one that the kids will go to when they are older, I am sure for advice because he thinks with his head not with his heart like mom!

When he does something from his heart for the kids I have to admit, I get a little misty. 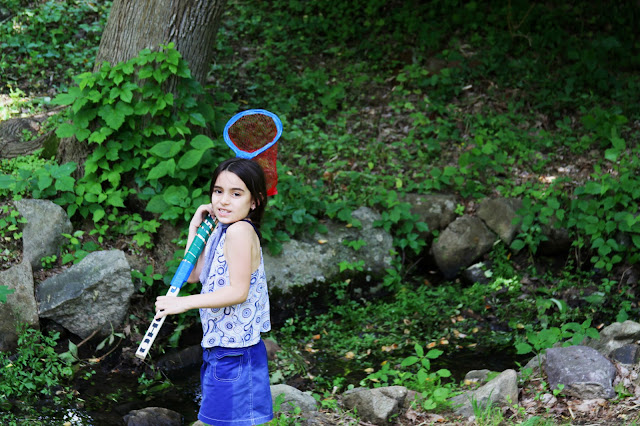 Goddess is a fearless frog, toad, and bug catcher but sometimes getting into the creek to get those frogs is dangerous and hard for her. She is a tiny girl but thanks to dad, she catches frogs like a pro.

He was fiddling downstairs as usual, his workshop where he has created a massive battery for a science project and is in the process of recreating a Tesla Coil, yeah did I tell you he is wicked smart?! 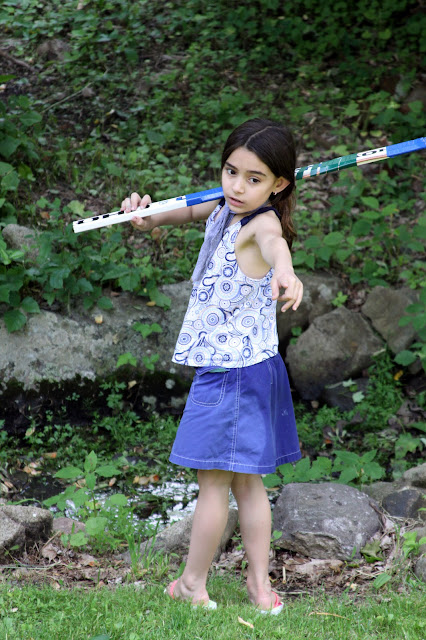 When he came onto the deck and called Goddess, holding this red, white and blue stick my heart smiled. He had taken his old hockey stick, a net bag we bought apples in at the supermarket and some duct tape and created the best frog catcher ever. 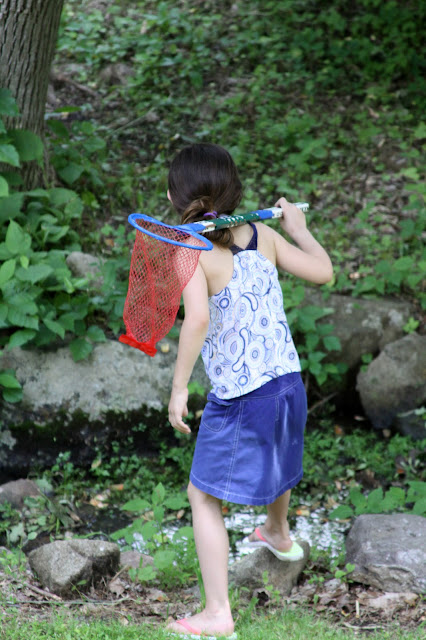 Goddess had caught two frogs before the Dad Made Net but one minute after heading down she was smiling and running up with a frog, two minutes later, another, before I could count to 200 she had 4 more. The tank was filled and I missed it because I was so busy watching her. 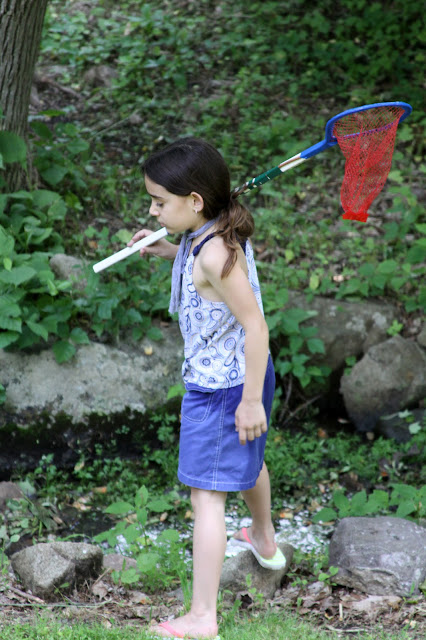 I love watching her with her stick out by the creek, scooping up frogs without having to lean in.

Look at that smile! She loves her frogs. The tank has been used for frogs, toads and salamanders for a few years now and holds her "pet for the day" until dusk when she MUST let it go. She is dying to keep one but I would hate to have it die. This tank is not for keeping things long term. One day I will get her one but not now. 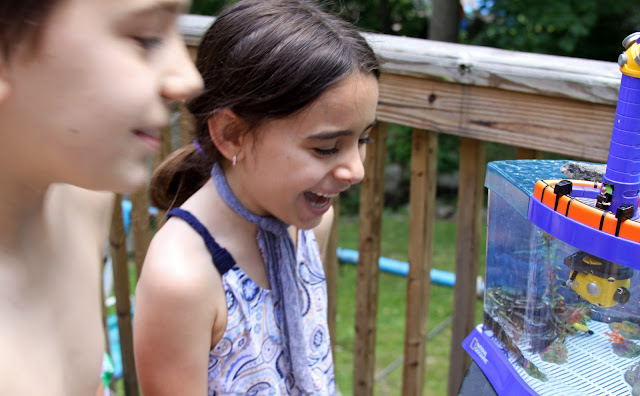 Handsome just had to get a closer view. He doesn't like frogs or toads the way she does. Just like his father, he finds them gross and slimy. But like Goddess, my sisters and I caught frogs when we were kids and begged to keep them as well. 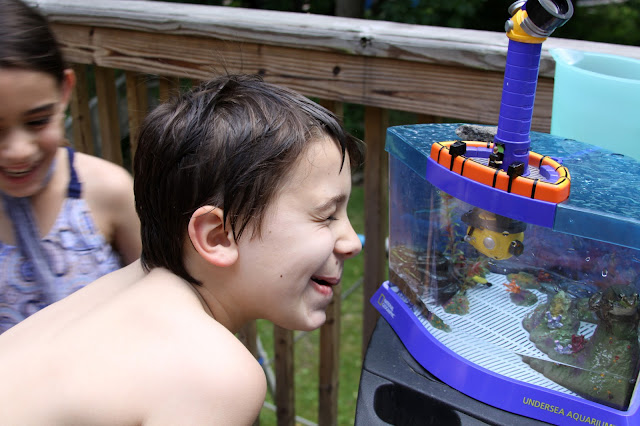 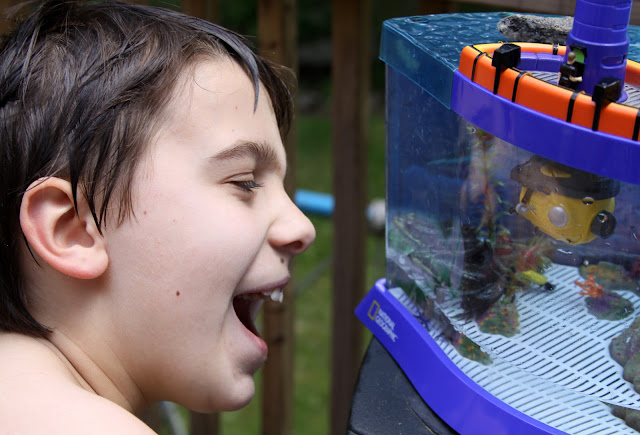 Goddess keeps watch over her "pets for a day" and even finds bugs to feed them. When we clean the tank out I find many dead things she has tossed in for them. 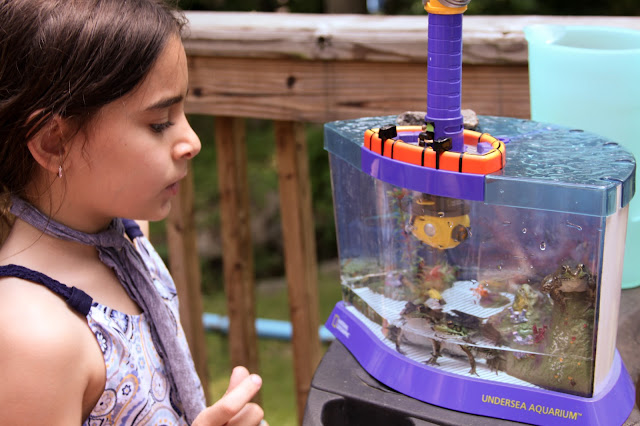 In the midst of the new frog catcher I saw this bug. We have seen him before and find him very interesting. He is the Eyed Click Beetle. Named for the clicking sound he makes when he snaps his body to move like a hinge. Check out those false eyes to scare his predators. 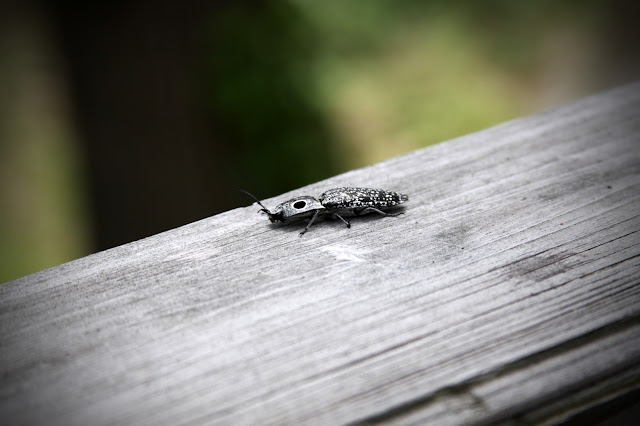 We got him and put him in the often used bug catcher so that Goddess could get a closer look. As you can see, she is happy to do so. 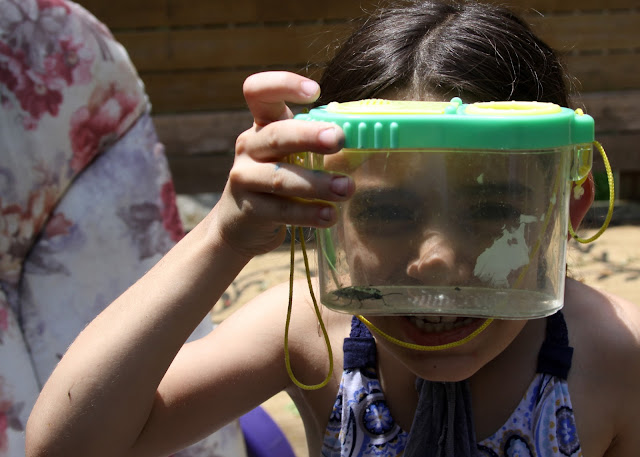 These two were caught before the "daddy frog catcher" 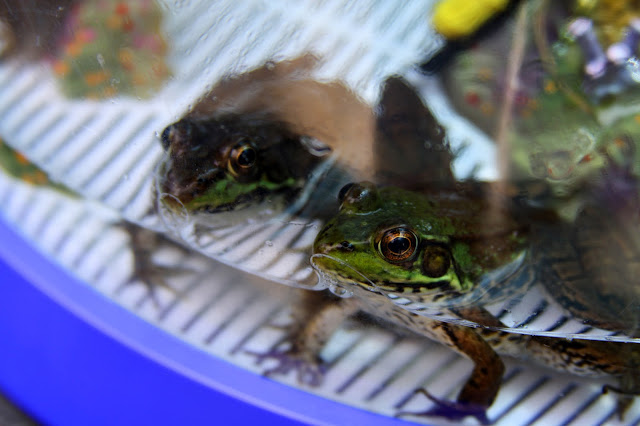 The little guy sits on top of the tank which has a periscope to see into the tank. It's pretty cool! They are just hanging out! 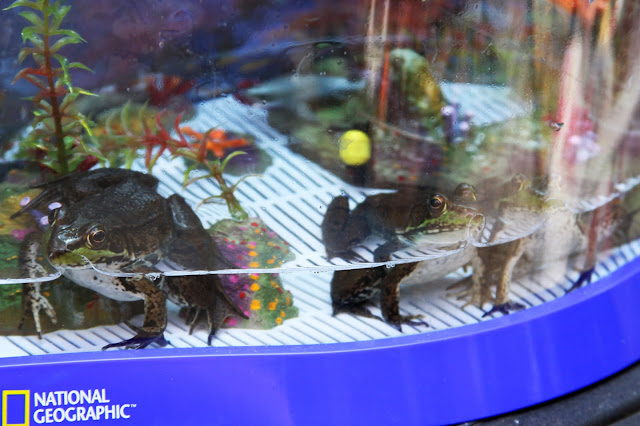