The Impatient Woman's Guide to Getting Pregnant 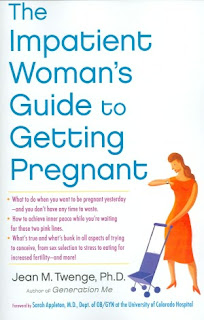 OK..you all know I am NOT looking to get pregnant but being pregnant was an amazing experience for me and I love sharing stories with my friends about my pregnancy, births and parenting. Anytime I can read something about pregnancy and the amazing wonders of it, I am in. I still watch all those real birth stories on TV. Love how amazing the body is. Sometimes getting knocked up, pregnant, bun on the oven, or whatever you want to call it isn't quick and easy which is why this book is so great. There are so many books about getting pregnant, how to, and whatnot but not a whole lot out there for those who have been trying without luck. Is it the luck of the draw (pun intended)?

Author Jean Twenge is here to help and I had a moment to talk with her using some questions from my "patient and impatient friends.

How long should you try on your own before heading to the doctor?

If you've been having ovulation-focused sex, I'd say 6 months. The standard advice is to wait a year if you're under 35, but that's a really long time and the average woman under 35 who's having ovulation-focused sex is pregnant within three months. If you’ve been trying for more than three months, don’t panic. Maybe you just haven't had your lucky cycle yet – it's a roll of the dice. If you just can't wait – and believe me, I'm with you – you can always consider making an appointment with your gynecologist in advance, to coincide with the month you will have been trying for six months.

With that said: If you can talk your partner into it, get a semen analysis right away. Up to half of fertility problems are caused by sperm issues (the technical term is "male factor," which sounds like a really bad men's cologne). Because men always have it easier, tests for sperm issues are quick and inexpensive – usually under $100 at a doctor's office (there are home kits too, but they are less accurate). What if he doesn't like the idea of getting his sperm tested? Remind him that spending 20 minutes buffing the banana with some soft porn is not so bad – after all, he voluntarily did this about 3 times a day when he was 14.

What foods do you think increase fertility? Which should you stay away from?

Studies find that vegetables, fruits, whole grains, fish, olive oil, and plant protein (like beans) increase fertility – or at least make ovulation problems less likely. There's no research on some of the other rumored foods (like pineapple core). What you should avoid: Trans fat, also known as partially hydrogenated oils (I like to call them "partially hydrogenated evil.") Fortunately, trans fat’s long crime spree through the American diet has mostly been halted; the foods that used to contain trans fat have mostly been modified to banish the substance. Most evil oils are safely in bad food jail. But not all. I’ll save you some time scrutinizing food labels to tell you the one food that still employs significant amounts of felon trans fats: frosting. That's really sad, because I think frosting is the best food on the planet. The label on tubs of cake frosting – which I read while I eat it straight out of the can with a spoon – reveals several grams of trans fat. If you’re trying to get pregnant, or will in the next three months, frosting moderation is probably in order.

Is it true what they say about positions for conceiving boys or girls?

There is no research to suggest that certain positions are more likely to produce a boy or a girl. The idea behind all of these rumors is that boy sperm swim faster than girl sperm. If that made a difference during natural conception there would be more boys conceived from sex close to ovulation. Instead, most studies find the opposite, with more GIRLS from sex close to ovulation (other studies find no difference or only a small one). So boy sperm might swim faster, but that doesn't actually produce the results one might expect. That also suggests position won't make much of a difference. The Impatient Woman's Guide has a whole chapter on the research on what does make a difference in gender swaying.

Is there a better chance of getting pregnant the more sex you have?

Yes, although the difference between sex every day and sex every other day is very small. And, contrary to popular belief, sex every day doesn't lower sperm count (though you might not want to share this bit of information with your husband).

How long should you get off the pill before trying to get pregnant?

A good rule of thumb: Three months if you've been on it for less than a year; six months if you've been on it for more than a year. It takes time for your cervical mucus to come back and your lining to thicken up again. Don't worry if you happen to get pregnant before then -- there's no evidence that being on the pill recently will do any harm to you or the baby. It's just harder to get pregnant the first few months off the pill.

Is it true that there are only a few days of the month you can get pregnant?

Yes! A FertilityFriend.com study of 119,398 charts showed that 94% of pregnancies occurred from sex on the three days around ovulation (the two days before and the day of). Studies from medical journals have found a "fertile window" from 5 days before ovulation to the day of ovulation, but only some of those days are very fertile -- in most studies, that's the two days before ovulation. So yes, that means the day of ovulation is NOT the most fertile! (Here is a great study that explains why -- look at Figure 1). In The Impatient Woman's Guide, I give precise instructions for how to find your two most fertile days from charting, OPKs, or the fertility monitor.

Will taking prenatal vitamins increase your chance of pregnancy?

Yes. Several studies have found that women taking prenatal vitamins, especially folate and vitamin B6, are more likely to get pregnant quickly. Omega-3 fatty acids (fish oil) have also been linked to better embryos in IVF, and smarter babies overall. And prenatal vitamins definitely lower the risk of birth defects when taken before conception, so start taking them at least 2 to 3 months before you start trying to get pregnant -- and maybe longer. One nurse practitioner I know advises all women under 50 to take prenatals because the evidence for lowering birth defects is so strong.

I loved this book. It is a great resource for everything you need to know or even some things you had no idea you wanted to know.

Jean takes all the medical, technical information and spoons feds the reader so that we can understand how much of the pregnancy myths are true and false. Can we really get the boy or girl we want? Does position matter? The more sex the better? Umm....all questions that Jean Twenge will answer in this book!

Check out some excepts here.


Disclaimer: I received a complimentary copy to facilitate this review. No monetary compensation was received.