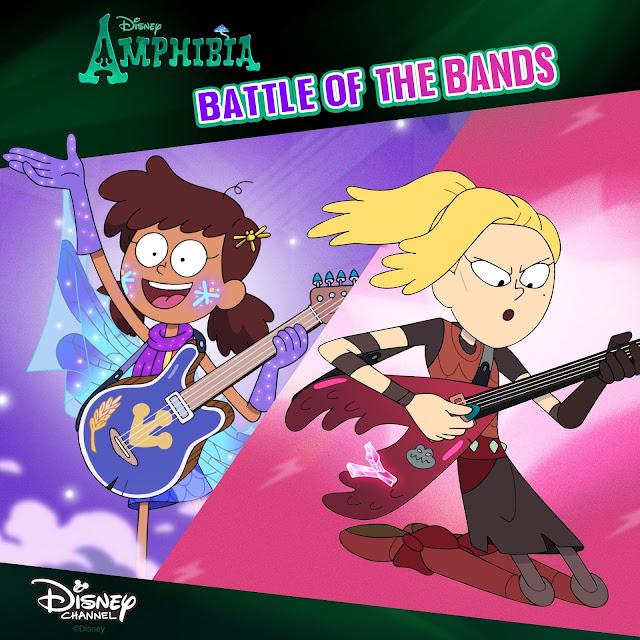 BURBANK, CA - Battle of the Bands (From "Amphibia"), a digital EP from Disney Channel's hit animated comedy series "Amphibia," is available today on Walt Disney Records. The EP features four tracks including the songs "Heartstomper" and "No Big Deal" from the new "Battle of the Bands" episode of "Amphibia" premiering tomorrow, Saturday, April 24 at 9:30am ET/PT on Disney Channel and DisneyNOW. In this episode, Anne Boonchuy, voiced by popular actress and longtime Disney Channel star Brenda Song, and her friends enter the Wartwood Battle of the Bands contest. Haley Tju ("Big Hero 6 The Series") and Anna Akana ("Big City Greens") guest star as Anne's best friends Marcy and Sasha.

Watch the video for "Heartstomper" on DisneyMusicVEVO here.  The video for "No Big Deal" will be available here on April 24.  Follow the Disney Channel Playlist here.

Battle of the Bands (From "Amphibia") track list is as follows:

"Amphibia" is a frog-out-of-water animated comedy series that chronicles the adventures of 13-year-old Anne Boonchuy, who is magically transported to the fantastical world of Amphibia, a rural marshland full of frog-people. There she meets an excitable young frog named Sprig Plantar (Justin Felbinger), his unpredictable sister Polly (Amanda Leighton) and overprotective grandpa Hop Pop (Bill Farmer). In season two, Anne and the Plantars are on a quest to unlock the mysteries of the music box as they leave the cozy confines of Wartwood for the distant city of Newtopia. On their journey, they will visit exotic new locations, uncover hidden secrets and experience unexpected reunions as they continue to search for a way to get Anne home.

Created and executive-produced by Annie Award-winner Matt Braly ("Gravity Falls"), "Amphibia" is inspired by his heritage, family and childhood trips to Bangkok, Thailand. The series is a production of Disney Television Animation.