Dawn of The Beast On Demand and DVD April 6th 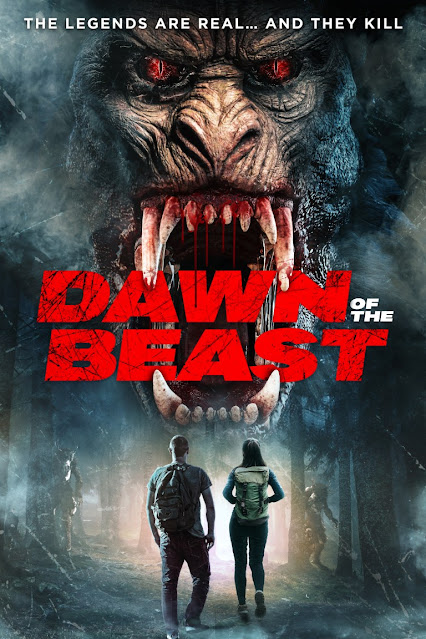 Aiming to see Bigfoot, a group of students venture deep into an area of the Northeastern wilderness known for its strange creature sightings. Soon, they learn that there is a much more sinister evil lurking in the woods, the Wendigo, and once the spirit knows you’re there, they will come for you. Who will survive in a battle between the two most notorious monsters of the forest?

Well, this isn't a bad movie at all. I was entertained HOWEVER, about 25 times I kept asking my husband...did we see this movie already? His answer was no since it hasn't come out yet but honestly, it felt like every other movie about a group of nincompoops going into the woods searching for something, splitting up and many dying.  I think the reason I felt like I had already seen this movie was because we had recently seen Monstrous another Bigfoot movie staring kinda like this. Hmmmm I just looked it up and it was written by the Anna Shields who wrote and starred in both of these movies. So I wasn't crazy. I knew it felt familiar.
So a bunch of students ahhhh they look like adults to me but anywhooo head out to the woods searching for Bigfoot but what they find is even more sinister and ugly. The Wendigo are some nasty nightmarish creatures and there are many of them.
The movie opens with a woman and man staying at the cabin that eventually our Bigfoot search party stay at after the credits. I like foreshadowing and this mini preview to the creatures sets up the movie and eventually we do see the original cabin folks in the movie with a skeleton wearing a necklace from the woman in the opening scene.
The acting wasn't horrible and honestly it wasn't bad for a horror movie. The effects were definitely quality which made Dawn of the Best less of a B. I love the way it was shot. Many times it felt like it skated on the verge of cheesy but since the cinematography didn't look like it could have been shot on a handheld camcorder the movie gets a thumbs up.
There were some creepy scenes.
Look cheesy movies have their place in my heart too but this was better than cheesy.