Anna And The Apocalypse Book #GIVEAWAY 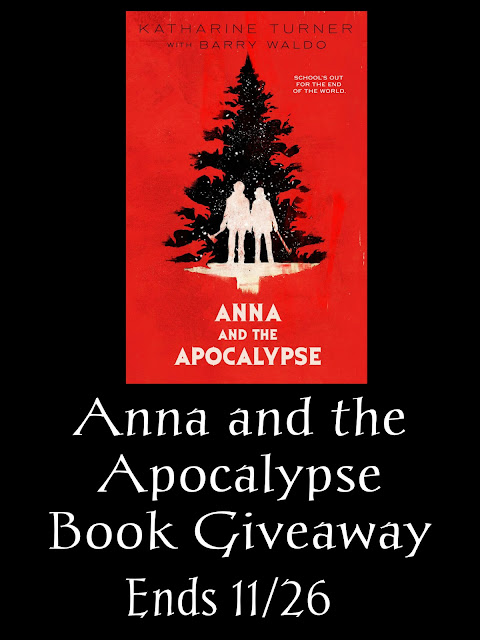 Anna and the Apocalypse, Orion Pictures’ feature film musical winning over audiences at film festivals worldwide with its humor, horror and musical dance numbers, is heading to select theaters November 30 with a national rollout to follow. Ahead of the film’s theatrical release, Anna and the Apocalypse is set to arrive in bookstores as an all-new horror comedy novel from co-authors Katherine Turner and Barry Waldo.

“Anna and the Apocalypse is a wonderfully realized world, full of strong characters, epic friendships and gripping adventure,” said the novel’s co-authors Katherine Turner and Barry Waldo. “The book gave us the chance to delve deeper into relatable, kick-ass characters and really dig into their lives and relationships. The Anna universe is so full of heart and so much fun to explore, it was just a gift to us as writers. It’s definitely the best zombie high school Christmas horror comedy book we’ve ever written!’

The Anna and the Apocalypse book, based on the original screenplay by Alan McDonald and Ryan McHenry, is available for pre-order now at major online book retailers and
https://us.macmillan.com/books/9781250318800 and will be released on October 23, 2018.

Anna Shepherd is a straight-A student with a lot going on under the surface: she’s struggling with her mom’s death, total friend drama, and the fallout from wasting her time on a very attractive boy. She’s looking forward to skipping town after graduation―but then a zombie apocalypse majorly disrupts the holidays season. It’s going to be very hard to graduate high school without a brain.

To save the day, Anna, her friends, and her frenemies will have to journey straight to the heart of one of the most dangerous places ever known, a place famous for its horror, terror, and pain…high school.

This novel is inspired by the musical feature film, Anna and the Apocalypse, produced by Blazing Griffin in association with Parkhouse Pictures and Creative Scotland, and distributed by Orion Picture in North America, Vertigo Releasing in the UK, Spendid in Germany, Pony Canyon in Japan, MovieCloud in Taiwan and various other partners around the world.

About the Authors
Katharine Turner is a British writer who lives in Los Angeles, California. She loves reading books, watching movies, the otters at The Los Angeles Zoo, piña coladas and getting caught in the rain.

Barry Waldo started telling stories at a young age in rural Arkansas. He went from his first job at Showbiz Pizza Place to getting an MBA at The University of Chicago Booth School. After working at Disney, he led a team crafting the story for Mattel’s Monster High and worked with Little, Brown Books for Young Readers to launch the bestselling Monster High book series by Lisi Harrison. He’s also worked with Shana and Ahmet Zappa to create the world of Disney’s Star Darlings, and with will.i.am of the Black Eyed Peas.

When Barry found himself on a rainy train ride from London to Scotland, listening to a young Scottish gent explain how he was developing a zombie Christmas musical, the idea for the Anna and the Apocalypse novel was born. Barry lives in London and Scotland with his husband.

So much sarcasm! It was a fast, enjoyable ride.  I cannot wait to see the movie! This is a dark humor book about a teenager and her friends who must face a zombie apocalypse.

It has all the typical things teens deal with except these characters are dealing with teen issues like when your bestie is the love of your life only they don't know it. Teen sarcasm to the max!  What will you do when your friends are getting eaten by Zombies?

There were some graphic, gory scenes that I felt like I shouldn't have been laughing at but I think it was meant to be funny!

On a side note: I cannot wait to see how they make this a musical. Like what scenes and will there be dance numbers? I am excited!

It is not for everyone but it was fun!

To Enter the Giveaway, please fill out this form!

Entry-Form
Disclaimer: I received a complimentary product for my honest opinion. No monetary compensation was offered.