There's No Place Like Home - The Wizard of Oz DVD Giveaway

Last month I wrote about The Wizard Of Oz coming up on its 75th Anniversary. Can you believe it? One of the greatest family friendly movies ever made and is still a classic today. When I became a parent I remember thinking, I cannot wait to introduce the kids to The Wizard of Oz. 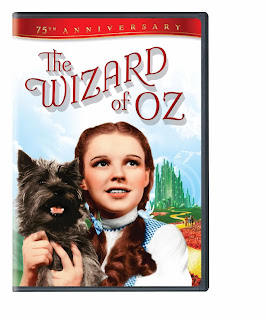 Home is where the heart is and my home is wherever my family is. For so many people this sometimes means living in deplorable conditions, sometimes even their car. Habitat for Humanity has been doing something about that since 1976 and now they have partnered with Warner Brothers to help a fundraising drive to benefit Habitat for Humanity's mission. 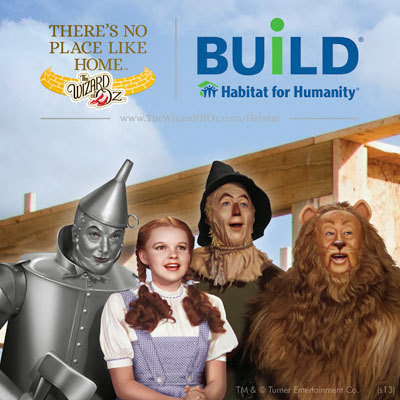 Warner Bros. Consumer Products (WBCP), Warner Bros. Home Entertainment (WBHE) and Warner Bros. Entertainment Corporate Responsibility (WBE) announced today a partnership with Habitat for Humanity to launch "There's No Place Like Home," a campaign celebrating the 75th Anniversary of the classic film, The Wizard of Oz™. The year-long program kicks off today with a digital fundraising campaign and, throughout the year, will feature several themed initiatives and events supporting Habitat for Humanity's work to create decent, safe and affordable housing in partnership with low-income families.

"Warner Bros. Consumer Products has been fortunate to delight fans of The Wizard of Oz through the years with a multitude of products, and our 'There's No Place Like Home' campaign is an extension of our appreciation for this classic film and those who love it," said Brad Globe, president, Warner Bros. Consumer Products. "The initiative will not only drive excitement among the iconic film's legions of fans, it will help generate important funds for Habitat for Humanity – a fitting partnership as we celebrate this milestone anniversary."
Ron Sanders, president, Warner Bros. Worldwide Home Entertainment Distribution said, "Warner Bros. Home Entertainment is proud to be included in this partnership with Habitat for Humanity. We're hopeful the significant monetary contributions it will generate will lead to the repair and rebuilding of communities worldwide and provide safe and secure places for families to live. What better way to be involved with this worthy organization than to arrange for The Wizard of Oz and its famous phrase to provide the key sentiment for this terrific campaign."

"Warner Bros. is committed to making positive contributions to the communities in which we work and live," said Susan Fleishman, executive vice president, Worldwide Corporate Communications & Public Affairs, Warner Bros. Entertainment.  "As the studio has enjoyed a long partnership with Habitat for Humanity, this serves as an ideal opportunity for us to use the affinity for a classic title like The Wizard of Oz to create awareness and support for such a worthy cause."
"Every day, in locations all around the world, we see how having a decent home can change lives and transform communities," said Jonathan Reckford, CEO of Habitat for Humanity International. "Adequate and affordable housing is foundational, and stable housing is inextricably linked to better health, education and livelihood opportunities. The simple statement is true:  There's no place like home."

Warner Bros. and Habitat for Humanity will offer a dedicated website and corresponding Facebook application where consumers can support the "There's No Place Like Home" campaign throughout the year.  All donations to the "There's No Place Like Home" campaign will support Habitat for Humanity's mission to create housing in partnership with low-income families.  The campaign will also feature local Habitat for Humanity build events around the country, kicking off with a marquee event in the greater Los Angeles area's city of Long Beach on September 24. The event will be co-sponsored by IMAX and will be supported by the Chuck Jones Center for Creativity and Cafe Press.

Andrew Lloyd Webber's The Wizard of Oz musical, which is currently touring nationwide, is also participating in the "There's No Place Like Home" campaign. Venues in select markets will facilitate donations each time a patron checks into the local theatre on Facebook.
Beginning September 20, The Wizard of Oz 3D will be presented in the immersive IMAX® 3D format and return to the big screen for an exclusive one-week engagement in IMAX® theatres across North America. Following the IMAX® theatrical release, on October 1, Warner Bros. Home Entertainment (WBHE) will release a limited and numbered The Wizard of Oz 75th Anniversary Collector's Edition, which will consist of a five-disc set including Blu-ray™3D, Blu-ray™, DVD and UltraViolet™ versions of the film.  Loaded with exclusive collectible 75th Anniversary memorabilia, a new documentary, The Making of the Wonderful Wizard of Oz; and over 16 hours of extras. Three more editions will be available separately: a two-disc 3D/Blu-ray, a single-disc Blu-ray, and a two-disc DVD. All four will contain the new documentary and extra content. For more information, visit www.thewizardofoz.com

About Habitat for Humanity InternationalHabitat for Humanity International's vision is a world where everyone has a decent place to live. Anchored by the conviction that safe and affordable housing provides a critical foundation for breaking the cycle of poverty, Habitat has helped more than 3 million people construct, rehabilitate or preserve homes since 1976. Habitat also advocates for fair and just housing policies and provides training and access to resources to help more families improve their shelter conditions. As a nonprofit Christian housing organization, Habitat works in more than 70 countries and welcomes people of all races, religions and nationalities to partner in its mission. To get more information, to donate or to volunteer, please visit habitat.org.
Warner Bros. joined forces with Habitat for Humanity to kick off the “There’s No Place Like Home” initiative on Tuesday, September 24 in Long Beach, CA with Habitat for Humanity of Greater Los Angeles.

Employees from Warner Bros., Habitat for Humanity International and Habitat for Humanity of Greater Los Angeles, as well as sponsors IMAX Corporation and the Chuck Jones Center for Creativity, were on site to participate in the home build as well as a beautification project at the nearby Burnett Library.
Other notable attendees included vocal sensations, Pentatonix, and the cast of The Wizard of Oz Musical.

Representing the Chuck Jones Center for Creativity,  artist James Mulligan designed the beautiful Wizard of Oz themed mural for the Burnett Library. Volunteers worked diligently with Mulligan to complete the mural, which was revealed at the close of the event. The Chuck Jones Center for Creativity will continue their relationship with the Burnett Library by setting up special “Wizard of Oz” art days where artist volunteers will work with the children visiting the library.

This event was a fantastic beginning to the year long campaign which supports Habitat for Humanity’s work to create decent, safe and affordable housing in partnership with hardworking, low-income families. For more information on how YOU can get involved, visit www.TheWizardofOz.com/Habitat
Follow this link to see video footage Extra about the Habitat for Humanity build:  http://pdl.warnerbros.com/wbol/us/telepictures/extra/092513_HABITAT_V1.mov
- See more at: http://www.thewizardofozblog.com/2013/09/the-wizard-of-oz-and-habitat-for-humanity-kickoff-the-theres-no-place-like-home-initiative-in-long-b.html#sthash.2YEa2yTl.dpuf
a Rafflecopter giveaway

Disclaimer: No monetary compensation was received to host this giveaway