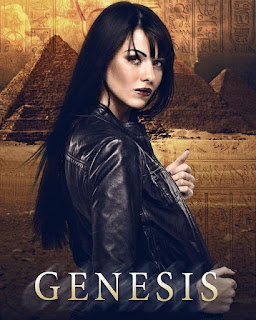 ATLANTA  (Sept. 24, 2020) – Atlanta-based Author Anne Schlea just released her fourth book in a series designed to deliver that prickly spine, cold wintery chill that comes with this time of year, particularly for Halloween.   Released on Sept. 16,  Genesis, available at Amazon.com is a fiction, paranormal fantasy that is part thriller, part romance in the Retribution Universe series.

“I’ve always held a fascination for ancient places and artifacts imagining what kind of stories they could tell, and the secret mysteries of the unknown. I invite readers to come live in this fantasy world full of other world beings for a while,” said Anne Schlea, author of Genesis, The World of the Fallen and The Retribution Universe Series.

Here is an excerpt from the new book:

Genesis – New Release: Sept. 16, 2020 - The Old One is the first of the vampires.  She takes the human Daniel under her wing, bringing him along on a journey that leads to the origin of the vampires.

Daniel landed in Berlin, Germany, over a year ago because he kept the wrong friends.  Little did he know that he’d come to love the old city, his job, and his life in Europe.  Now that Aiden has arrived, a quiet, red-headed, refuge from a war back in the states, Daniel is settling into a domestic life he never dreamed he’d have.

The arrival of The Old One, the mother of all vampires, turns Daniel’s domestic happiness on its head as she drags him away on an adventure through archeological sites of Europe, America, and Egypt on a hunt for origin of vampires.

Can Daniel, an ardent agnostic, walk through the birthplace of religion without questioning himself?  And can he win the heart of a woman so destroyed by her past that she barely has hope for the future?

Anne Schlea was born and raised in Northwest Ohio where she spent much of her childhood on her Grandparent’s farm.  She graduated from Woodmore High School and then went on to Berry College in Rome, Georgia, where the first chapters of the Retribution Universe began to take shape.

Anne is an avid reader with over three thousand books in her personal collection.  As a teen, she read the entire paranormal fiction and romance sections of her local library.  Today, Anne lives in the northern suburbs of Atlanta, Georgia, a short drive from the Appalachian Mountains, with her husband and her cat.  She loves visiting wineries, making music, running her business, and hanging out with her Siamese cat, Rosanna.