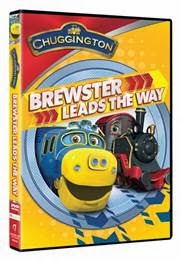 Preschoolers from Coast-to-Coast to Embark on Exciting Escapades
With Latest Release from Anchor Bay Entertainment – February 11, 2014


It’s Brewster’s turn to take the spotlight! Young viewers nationwide are in for thrilling, high-speed adventures featuring one of their favorite chuggers in “Brewster Leads The Way,” the newest addition to the popular “Chuggington
™” DVD series from Anchor Bay Entertainment. Filled with six action-packed episodes featuring relatable storylines and positive messages for preschoolers, “Brewster Leads The Way” arrives at retail on February 11, 2014, just in time for Valentine’s Day! And, to give kids even more to love, the new release will be available in two different versions, including one with an Old Puffer Pete die-cast engine from TOMY™ – the perfect Valentine’s Day gift for “Chuggington” fans!

“Brewster Leads The Way” is an irresistible collection of episodes that seamlessly blend non-stop fun and valuable lessons for preschool audiences. Brewster, together with his best friends Wilson and Koko – plus new chuggineers Zack, Tyne and Fletch – helps gently guide viewers in learning to “ride the rails of life.”

Throughout this newest assortment of energetic adventures, Brewster takes the lead! In the title episode, Brewster must oversee the transporting of a heavy load with the assistance of the mighty Chuggers. But, when the Chuggers get called away or breakdown, it’s up to Brewster to move “full-steam ahead” and get the job done! And, in “Track Laying Brewster,” when a flash flood causes Rocky Ridge River to overflow, Brewster’s track-laying abilities are put to the test. He has to save Zack, Tyne and Fletch by helping them get their wheels above water – and fast!
Additional episodes on the new DVD include “Babysitter Brewster,” “Brewster Meets The Mayor,” “Poor Old Puffer Pete,” “Old Puffer Pete’s Firebox,” and bonus Badge Quest adventure, “Brewster’s Carwash.” The title also contains a Chugger Spotlight segment with a special character montage that centers on Brewster, along with an original Chug Patrol: Ready to Rescue music video, and coloring and activity pages, too!

A colorful and contemporary CGI-animated TV show from Ludorum that reinforces early social readiness skills, “Chuggington” airs daily on the 24-hour Disney Junior channel at 7:30am and 1:30pm with additional evening airings.  The series made its Season 4 debut on Disney Junior, Sunday, October 20, 2013 with the first-ever primetime “Chuggington” special, “Chug Patrol: Ready to Rescue.”

We have been snow bound and happy to have some new DVDs to watch thanks to Anchor Bay Entertainment. In this newest edition of Chuggington, Brewster has the starring role in these episodes. Brewster is one of our favorites but personally I loved the last two episodes which starred my favorite Old Puffer Pete.

Now that I am working at the Elementary School as an aid I get to talk to a lot of Kindergartners who LOVE Chuggy and the gang.  Since it has been very cold out our indoor recess has allowed us to watch a lot of movies.

The kids favorite episode was Babysitter Brewster. In this episode Brewster teaches Hoot and Toot how to safely use the train turntable.

The episodes covered on this DVD are:

What the kids love most is how the trains work together just like in class.  What the teachers and I love most is how each episode focuses on cooperation, and important social emotional lessons.

Perfect show for the classroom!

About “Chuggington™”
“Chuggington” is acontemporary, action-based, energetic and vibrant CGI series for children ages2-5 years. The series follows the adventures of three young trainees – Wilsonand his friends Brewster and Koko – as they ride the rails and take on exciting challenges that test their courage, speed and determination. Along the way, andwith help and support from a strong community of engines and people, they learnpositive values and new skills empowering them to become the best trainees theycan be. Further information is available at www.chuggington.com.