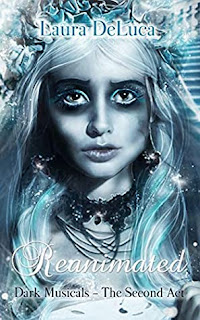 After the birth of their daughter, Rebecca Hope-Patko and her husband Lord Justyn return to their home state of New Jersey to open their dinner theater. For their first season, Justyn tries his hand at directing while Rebecca stars in their small stage adaption of Ghost Bride. Rebecca has also embraced a second role—taking a stand against domestic violence by joining the Underground Railroad, a covert organization that shuttles battered women to safety.
At first, both operations run smoothly, but before long it’s clear the secret agents’ identities have been compromised. Rebecca is stalked and terrorized, and even the theater is under attack. Faced with deception at every turn, Rebecca is afraid to trust anyone and has reason to fear this battle may leave her a widow instead of a bride. Can this diva unravel the mystery of the Ange du Palais Theater before someone she loves winds up in their grave?

I have read the 5 book prior to this and love how different this feels. Our main characters have definitely grown up a lot from the first two book. Rebecca and Justyn and their two children Erik the musical protege' and baby Harmony are back at the Jersey Shore after being overseas and opening their own musical theater.  Their first play will be Ghost Bride which is a take on Corpse Bride (while I was reading I felt the strongest urge to stop and re watch Corpse Bride for the 10th time.)  Without giving too much away you should start at book 1. The books can stand alone as Laura does a good job of laying out the past quickly so you are caught up on the whys and relationship histories of the many players in the book but I highly suggest starting at the beginning and getting to know and falling in love with the characters as all Laura DeLuca fans have.

I love how Rebecca's past has brought her to where she is right now.  She can take care of herself and her family and now she is helping others through her undercover work.  She is a stop on the Underground railroad where woman will come to escape abusive situations.

Like all Dark Musical Mysteries Laura does a wonderful job of crafting the lives of these wonderful  characters she obviously loves into a whole new story and OMG my heart...Lord Justyn I can't take anymore!!!

If you are stuck inside like the rest of the state...there is no time like now to dive into a series.


Disclaimer: I received a complimentary digital copy for my honest opinion. No monetary compensation was offered.