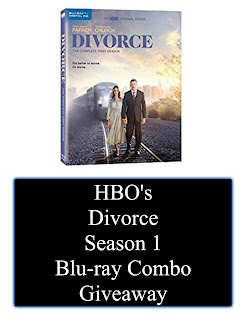 As mentioned last week, here's is the review and giveaway for Divorce!

Sarah Jessica Parker earned a Golden Globe nomination, Best Actress in a Comedy Series, for her new role in the new hit series. Divorce centers on Frances (Sarah Jessica Parker), who more than a decade of marriage and two children, has suddenly begun to reassess her life and her strained relationship with her husband Robert (Thomas Haden Church).

I am 5 episodes in and LOVE it! Sarah Jessica Parker is of course phenomenal in this as is Thomas Haden Church. While it is about a failing marriage and at times dark the actors are gold with you wanting to love and hate each one at different times.  Divorce isn't easy on any party involved. Whether it is your kids and deciding when to tell them or who get which friend in the divorce, it is covered and your heart breaks for the loss of the marriage of these two people who obviously at one time loved each other.

Watching a show about the break of up a marriage may not be your cup of tea and I wish it was funnier (more flipping the bird as they pass each other in the hall) I am enjoying it. However with that said, I find myself wondering why Sarah Jessica's Francis jeopardized her marriage for the egotistical, pathetic boyfriend or maybe a few more episodes in and I will understand but right now I am on Robert's side.

Enter the Giveaway before June 10