Cowgirls N' Angels On Blu-ray and DVD Oct 2nd At Walmart ONLY! 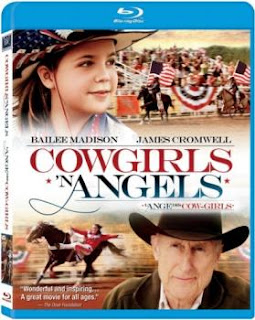 Press Release:
Get ready for an inspiring story of self-discovery and triumph with Cowgirls ‘N Angels on Blu-ray and DVD arriving October 2nd Los Angeles, CA (September 6, 2012) - The rodeo is coming to town as Cowgirls ‘N Angels arrives on Blu-ray and DVD on October 2, 2012. The film stars Young Artist Award winner Bailee
Madison, (Just Go With It) and Oscar nominee James Cromwell (The Artist). In addition to Cromwell, Madison and Jackson Rathbone (Twilight Series), Cowgirls ‘N Angels also stars Alicia Witt, Kathleen Rose Perkins, Frankie Faison, Leslie Ann Huff, Dora Madison Burge and a host of others. The film was directed by Timothy Armstrong from a script by Armstrong and Stephen Blinn.

This is an against-all-odds contemporary classic that will prove you can never underestimate the power of a child’s dream. Cowgirls ‘N Angels tells the tale of Ida (Madison), a rebellious young girl who dreams of finding her father. While searching for her dad, she bonds with the Sweethearts of the Rodeo, a team of young female trick riders run by former rodeo star Terence Parker (Cromwell).

Recognizing Ida’s drive and determination, Terence sees a lot of himself in Ida and agrees to allow her to become a member of the Sweethearts. Accepted wholeheartedly by her new “family,” Ida finds a new passion and direction. She embarks on an epic adventure full of exhilaration, love and heartache. Although she sets out to find her father, she soon discovers much more than she dreamt possible including a love for horses and a personal responsibility that redefines her life. With several obstacles along the way Cowgirls ‘N Angels ultimately tells a story of true self-reliance and perseverance. The film is clear winner for families and rodeo lovers alike. Cowgirls ‘N Angels will be sold exclusively at Wal-Mart and walmart.com. It will also be available on the date of release on Video On-Demand carriers including DIRECTV, Comcast, Cox, Time Warner Cable, iTunes,VUDU, Amazon and Xbox. The release will be supported by a comprehensive marketing, media and publicity plan, including select promotional appearances by the SKY HIGH ANGELS, the talented Sport/Trick Rodeo horsewomen featured throughout the film.

DVD Special Feature:
-“Behind the Scenes of Cowgirls ‘N Angels”

Ida, a feisty and rebellious young girl, dreams of one day finding her father, a rodeo rider, whose identity her mom has kept from her. While searching for her dad at a local rodeo, Ida meets the Sweethearts of the Rodeo, a team of young female trick riders run by cowboy legend Terence Parker. Terence discovers that Ida is the grand-daughter of a friend who passed away years before, so he decides to help her. Ida joins the Sweethearts and embarks with them on a tour of rodeos throughout the west. Ida hopes to find her father, but she discovers much more, including a love for horses that redefines her life. 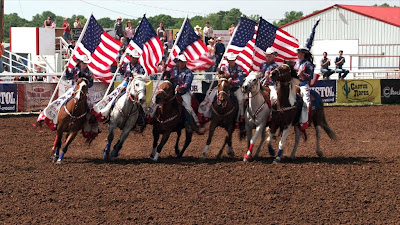 I am a huge fan of Bailee Madison.  She just breaks my heart in practically everything I have ever seen her in so I was excited to see this sweet movie about a little girl being raised by a single mother.

In Cowgirls N' Angel's Bailee plays spirited Ida who longs to find her daddy! She hangs around rodeos on the lookout for him and eventually friends a riding troupe called the Sweethearts of the Rodeo run by Terence Parker played by Oscar Nominee James Cromwell.

Terence's troupe stars his daughter and a bunch of wayward girls who has has taken under his wing and given a second chance in the game of life. Terence talks Bailee's mom into letting her go with the Sweethearts on the road where she learns a lot about herself and finds herself with a "new" family.

I personally loved this movie and there are great messages and lessons such as being self reliant and never giving up on your dream. There are as many bad ones also. 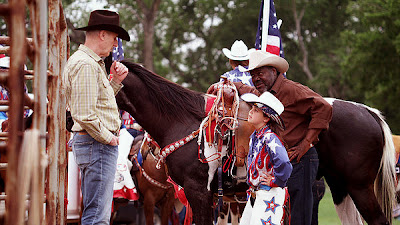 Stealing - Ida steals a horse, keys, etc.
Breaking In - Ida breaks into the horse farm at night to ride a horse.
Lying - Ida writes a note of approval from her mom to Mr. Parker to enable her to ride and spend time with him.

There are certainly more than the ones I have listed and none of these things ever go punished. However, even with all that the movie is a great family friendly movie and like most movies starring Bailee, I did my fair share of crying!

Available for your and your family at Walmart on October 2nd 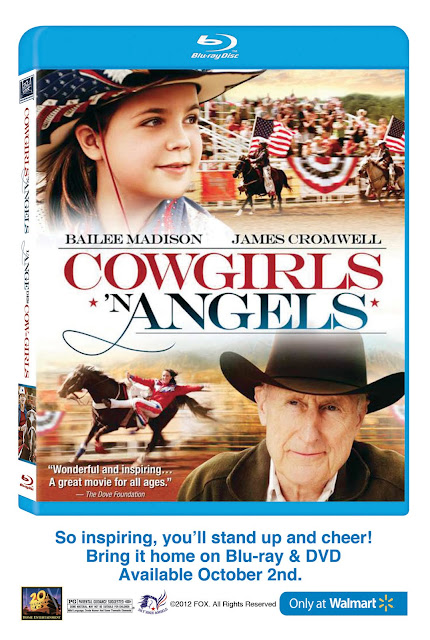 For the book version of Cowgirls N' Angels on Kindle go here.

Disclaimer: I received a complimentary DVD Screener of this movie. No compensation was received.