Handsome and I were up before 5 A.M. Goddess on the other hand didn't walk out of her bedroom until 10 but that is typical. I didn't want to rush them since they had the day off from school for a Superintendent day but wanted to do more than watch the kids play online in any way, shape or form.

As I was getting ready to take the kids to a trail for some walking, two kids from the street came by and they all wanted to go to the trampoline. I'm happy they are unplugged and doing someone old time playing with friends. It has become a nightly thing and I love that I can hear them being kids, off their computers, game systems or Kindles so I foster this to the max.

When the boys left the kids were complaining they were hot and DID NOT want to walk. I told them the trail wasn't in complete sun, that we would be walking through a tree lined area with moments of sun and how no one wants to go out of the house unless it is to spend money. Yes, I know mom's know how to throw on the guilt.  My daughter started dressing and informed me that this didn't mean anything. I know she is getting ready for a walk so I ignore. They both show up ready to go. I grab some water and we head out. My son is talking about how it is too far away and he really doesn't want to go but OK we will go. All the while in my head I am thinking hell yes you are going to go. We are walking. 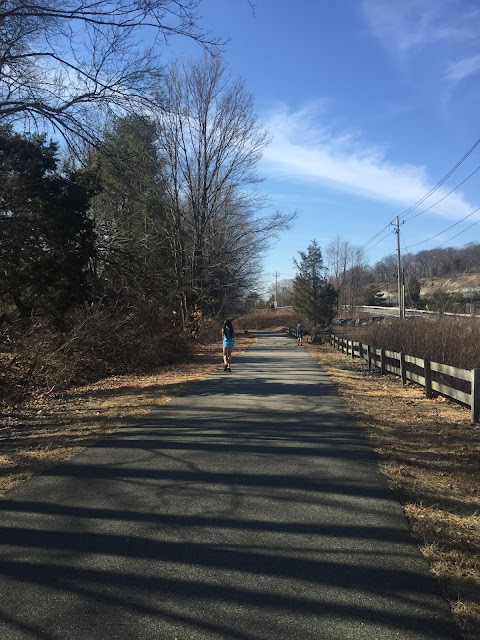 I must admit it was hot. I don't sweat which can lead to heat stroke or at the least being very uncomfortable and was second guessing driving 20 minutes so we could walk in the heat too.  We couldn't find parking right away because after all it was already 12:45 on a gorgeous day. The Park and Ride was jam packed. I found something and had to gross a busy road with the kids and then walk along side it single file which freaked me out (need to research where more parking is for this trail.) 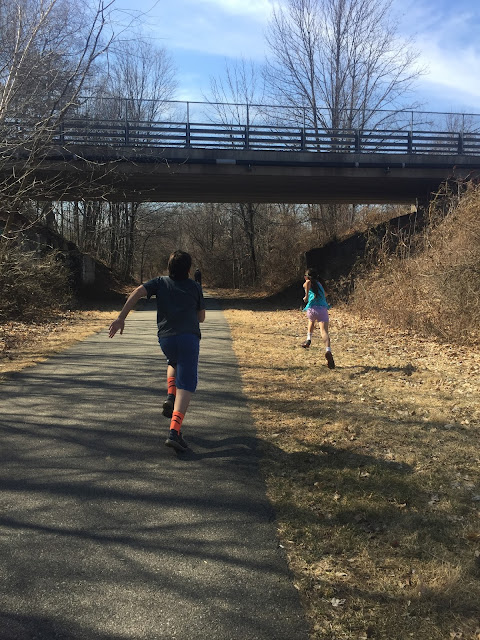 We walked about 2 miles (because it was just to check it out). The kids ran, walked, skipped and hugged me. It was fun! 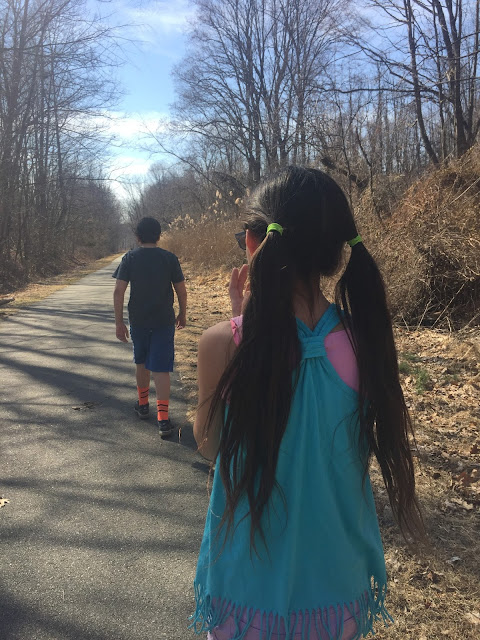 Then I thought...ice cream...we need the cold stuff. We drove to three places one had no parking, the other had an ice cream brand I am not crazy about so we headed to another town with Handsome grumbling. We walked more which elicited way more grumbling and how he just wanted to go home. I explained that his games would be there. We drove to another town our fourth ice cream stop and just as they were telling me what kind they would want because this place didn't have soft serve and that was what they wanted a friend called asking if we wanted to go to Linner (lunch and dinner). We decided on a place that was back in the town where we went walking the trail. UGH...It's OK I'm down with that but this meant telling my son that we were going to Linner and had to drive back. He was not happy. Since she was 30 minutes away I thought, I could still get them ice cream. They deserve it. 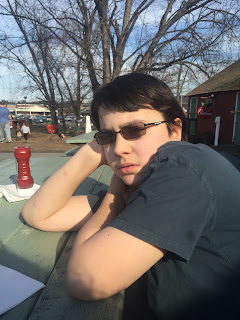 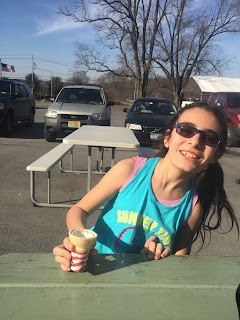 We found a place. The soft serve machine was just being started up and wasn't ready. As they were deciding, the machine was ready and they got exactly what they wanted. 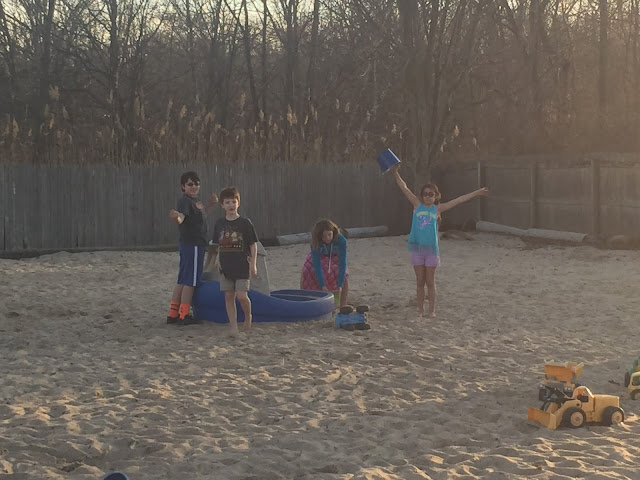 We met my friend at her house and headed out to the restaurant. My son as always after grumbling (you can see from the pic he was not feeling it but she is always ready for a good time) and being there informed me that he had a great time. I hugged him and told him to trust me that we have these conversations way too often and getting out of the house is important and that I will always make sure he has fun. Does anyone else deal with kids like this? I'm sure you are out there too. 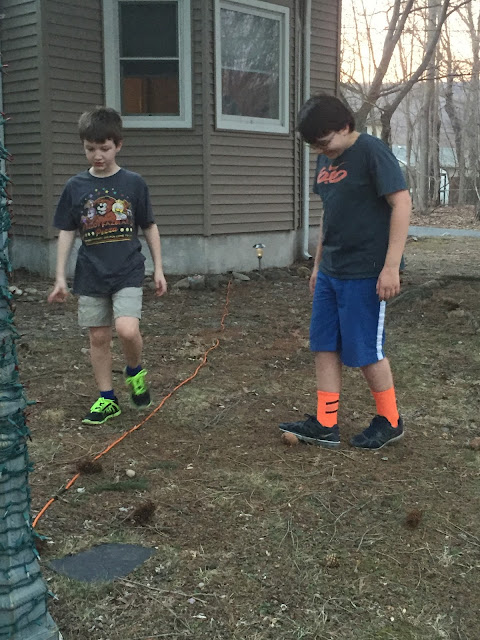 He played with friends, the restaurant has sand in the backyard so you can eat and when the kids are done they head over to a fenced in area and play in the sand. He loved it even though at first he had told our little 2nd grade friend that he was too old for sand. 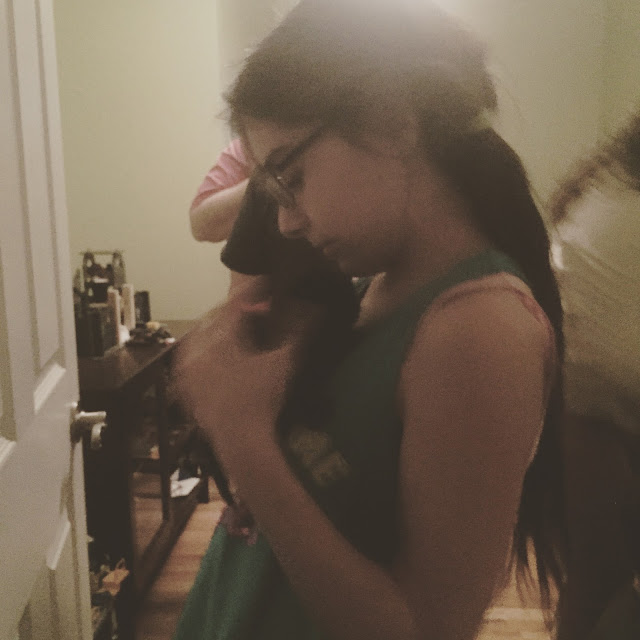 After dinner we headed back to our friend's house and decided to go walking, we walked until we couldn't see the street anymore. We stopped at a friend's house whose cat just had kittens. We all held kittens and finally headed home with my kids.  When we walked in my husband was sleeping on the couch, we said hello and went on and on about the restaurant, the kittens and our walk. It was a great day.

Since Goddess held her first kitten, she is begging even more for one. Daddy isn't ready for a pet. We had them before the kids and now is not the time but I vow she will get that kitten one day.