HOTELLES by Emma Mars a Review

“Rife with sexual tension and mystery, this first tale in a trilogy will have readers eager for the translation of Mars’ next installment.”
—Kirkus 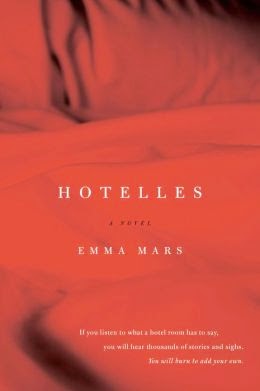 If you listen to what a hotel room has to say; you will hear thousands of stories and sighs.
You will burn to add your own.

A young woman is tied to the headboard of a bed. Blindfolded, she awaits to be taken.  A man will soon emerge from the bathroom and do with her exactly as he pleases.  She has no idea when this will occur.  She only knows it will not be her husband.

About the Author:
Emma Mars is the pseudonym of an author who lives in france.

Unfortunately I must admit, it took me a while to get through this book. It didn't call to me although it was really well written with enough plot twists and side stories to keep you interested.

I believe what kept me from wanting to read it was that I have never been a big mystery fan and while this book is billed as erotica it is mostly a mystery with some enticing erotica thrown in.

If you are a fan of mystery and intrigue I believe you will love this book. The story is good, the characters are good and well rounded it just isn't my genre.

I was interested in the side story of the two brother's loving a woman who was now deceased and the mystery surrounding it but that was were it ended for me.

Passing this over to a mystery loving friend who I know will love this.