Man I feel old knowing that Napoleon Dynamite is 10 years old? What? I remember seeing it when it first came out. This is not a film for everyone. It is for people who were never uber cool. Get the joke. Can laugh at themselves, enjoyed Beavis and Buthead (Napoleon was always a combination of the two for me) and think spaz's are funny. Napoleon and his deadpan delivery and spaz like moves cracks me up every time. Check out Napoleon Dynamite if you haven't seen it yet. AND if you don't know what Vote For Pedro' means you are missing out.

The plot, eh but it is so worth your time. This is classic stuff here.

Napoleon's Uncle Rico comes to watch the Napoleon and his 30 something year old brother Kip after grandma has an ATV accident.

The movie focuses on Napoleon and his friends Deb and Pedro who is running for student body president against Summer (Hilary Duff) the popular cheerleader. 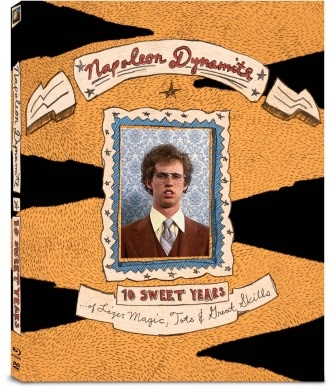 Napoleon Dynamite 10th Anniversary Edition
In celebration of the 10th anniversary of Napoleon Dynamite comes this fuzzy, collectible, liger-fur Blu-ray + DVD Combo Pack with a locker-full of special features that are more fun than big sleeves and extra tots!

Napoleon Dynamite is a new kind of hero, complete with a tight fro, sweet moon boots, and skills that can’t be topped. Napoleon spends his days drawing mythical beasts, duking it out with his brother Kip and avoiding his scheming Uncle Rico. When two new friends enter Napoleon’s life – shy Deb and mustachioed Pedro – the trio launches a campaign to elect Pedro for class president and make the student body’s wildest dreams come true. But if Pedro is to beat stuck-up Summer, Napoleon will have to unleash his secret weapon...