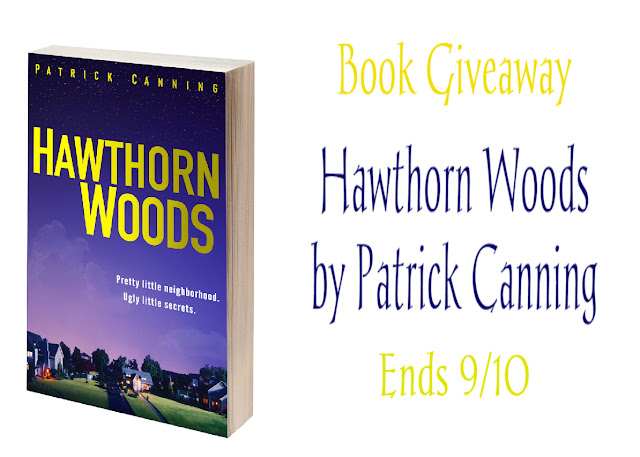 Fans of  Pretty Little Lies + Stranger Things will love Hawthorn Woods which centers on Francine, who is reeling from a catastrophic divorce she just can’t seem to leave behind. She retreats for a two-week stay at her sister’s house in the picturesque town of Hawthorn Woods, Illinois. The quaint neighborhood of shady trees and friendly neighbors seems like the perfect place to sort through her pain and finally move on with her life—but the tranquility doesn’t last long.

Beginning with a complete stranger throwing a drink in her face at her own welcome party, Francine soon discovers the supposedly idyllic suburb is hiding a disturbing number of mysteries. She quickly changes her vacation prescription from one of relaxation, to one of investigation, as she tries to figure out which of the smiling neighbors has a secret they’d kill to keep?

A perfect page turner to escape into during the summer months, Hawthorn Woods is sure to keep readers guessing at what’s happening behind closed doors.

Secrets and lies can always be found in every little quaint town!

I was into this book from page 1. The story is about Francine who is going through a bitter divorce and staying at her sister Ellie's and brother-in-law's house as they head out on their "honeymoon" finally. At the "meeting the neighbor party" a woman throws a drink in Francine's face and this my friends is where the ball starts rolling on a mysterious thrilling ride well written by Patrick Canning.

So why would a stranger throw a drink in newcomer Francine's face? I had no idea and neither did Francine or anyone else.  Ellie introduces Francine to Laura Jean another neighbor and they become fast friends.

Thanks to Laura Jean, Francine now has a "friend" in this foreign land called suburbia with its quaint neighborhood, friendly neighbors albeit "pixie cut, drink thrower" until a neighbor's goat Brownie is murdered and a bloody message is left in the street.

Francine and newcomer Bruno a teacher/investigator are on the case but can Francine trust Bruno? Are his assumptions legit? Is Francine in over her head?

The cast of characters is long and I have only mentioned a few but they are all interesting and the twisted ending had me so shocked that I had to re-read a few passages to see where I could have missed it! I didn't. Patrick Canning is just a really good writer. He definitely created a thrilling world in a small suburban town and I loved all the questions at the start of each chapter.  Not sure how I missed the twist but WOW so happy I did because that "wait? what? in books doesn't happen often and I am so happy when it does!

I am really trying not to spoil things here and feel I am leaving much out of this review. My final thought...you will love it!

More on Patrick at www.patrickcanningbooks.com

To Enter The Giveaway:

Disclaimer:  I received a complimentary product for my honest opinion. No monetary compensation was offered.