Someone Else's Shoes by Ellen Wittlinger Takes on Depression, Suicide and More 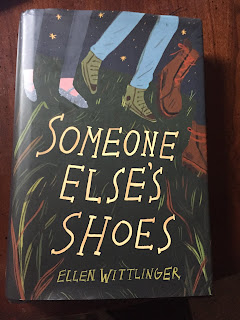 Izzy, a twelve-year-old budding comedian, feels pretty miserable about her family life—her father is remarried with a new baby on the way, her mother is dating Izzy's dentist, Dr. Gustino, whose rebellious sixteen-year-old son Ben is a huge hassle, and now her cousin Oliver and Uncle Henderson are moving in with Izzy and her mother. Of course, Izzy feels bad for her ten-year-old cousin—his mother recently committed suicide—and Uncle Henderson has become zombie-like ever since.

When Uncle Henderson disappears one day, Izzy finds herself on an impromptu road trip to upstate New York with Oliver and Ben, the three of them seeking family and acceptance.

A deep read that takes on difficult issues like suicide, depression, divorce, and running away with sensitivity and realness.

While the subjects are painful none of them were done in horrific manners. It felt very real. I really enjoyed the main character Izzy. She is a bold, strong, female character who I felt gave complete realism to the story. She is balancing a lot; friends, family, her parents divorce and how she feels about her father's new family, her mother's new boyfriend and life all while trying to protect her cousin and uncle from ridicule and trying to make sense of it all herself. She is also feeling invisible as we all have and tries something to make herself be seen!

What I liked most about this read was that none of the kids were bad! It is all about appearances and how we may look to others. Ben has a reputation but turns out being a really good 16 year old who is dealing with his own family issues. He turns out to be somewhat of a hero in the end and poor Oliver. My heart hurt for him and what he was going through. I loved everything about him.

Ellen Wittlinger does a wonderful job of showing how we are all going through our own personal hell and how we don't always truly know the people we are closest to but at the root of it all, we are all good and doing the best we can. I also appreciated how she wrote the characters explaining suicide  in a way that works for everyone stating that it is not that they don't love their family, their love is what they are thinking of. They believe they are doing everyone a favor by removing themselves. They think the family will be better off without them.