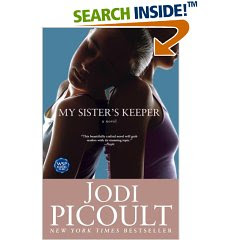 Last week I finished My Sister's Keeper by Jodi Picoult. This was my first Jodi book and had no expectations going in. I liked it a lot, reading it in 5 days, not a record but for a mom with two kids, a husband who I work for, a freelance job, 5 blogs, MySpace and 2 therapists to work my schedule around not too bad.

My girlfriend (my personal book club bud) didn't love the book and had a hard time getting through it until the end hence the late review. I really wanted her to finish before I wrote about it.

The book is about Anna, a 13 year old girl who was the product of preimplantation genetic diagnosis, who has spent her life giving blood, marrow, platelets and more in order to keep her sister Kate alive. The book is about love, sisterhood, family, and controversial medical science. For those who love a court room story, there is a little of that there although as someone who isn't into those kind of reads, it worked for this story.

Anna decides to hire an attorney to fight her parents for emancipation and keep the kidney that they have scheduled to remove, or Kate will die.

The story was great and one that will hit a nerve with most readers. What do you do if your child is sick and dying but you are told that by having another, you could save her life. I chose not to have a tubaligation for this reason. Before kids I probably wouldn't have thought this was something that was morally correct. After having my babies, I knew there was nothing I wouldn't do for them, including having another baby.

My girlfriend and I had a wonderful conversation about morals and what we would do in this situation. We had very different opinions along with one of her daughters who chimed in that she would never want to hear that she was born to save a sibling.

I think that depending on which character you are sympathizing with at the moment your morals will change. You can sympathize with the father, the mother, the dying sister, the ignored brother, or 13 year old Anna and understand why they do what they do.

My biggest problem and it wasn't so much a problem well into the book was that each character had their own chapters, making them the primary character. I found that I had to keep going back to find out who was who.

I enjoyed the book and felt a connection to Anna, her father and to her brother Jesse all for different reasons. My heart ached at the end and I think the ending will stay with me longer than I want it to.

While trying to find a picture of the book cover, I found out that the movie will be out in 2009 starring Cameron Diaz, Abigail Breslin, Alec Baldwin and Jason Patric. I am so psyched. I love seeing movies that I have already read.