Amateur Review of 30 Days of Night 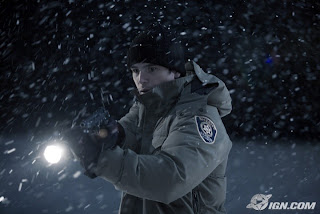 Before I forget what I thought about this movie which I saw the same weekend I watched this one, here are my thoughts:
30 Days of Night was released in October 2007. It stars Josh Hartnett and some chick named Melissa George. My husband really liked it. I, not so much.
I was distracted by a couple of things:
1. Josh was so GROWN. I mean, I know it has been a few years since Pearl Harbor and Black Hawk Down, but really... It was like seeing a cousin you hadn't seen in ages and still remember them as they were the last time you saw them.
2. Everyone, especially Melissa George who plays Josh's ex-wife, and the kid who plays Josh's brother needed a crate of Chap stick on their lips. Shit, I know they are in Alaska and it is friggin cold but keep that shit in your pocket and lube up your smackers once in a while. 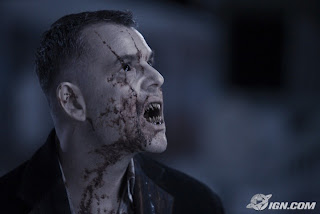 3. The Vampires (oh yeah it's a movie about Vampires, I left that out didn't I), where just weird. The head guy, Marlow is like the unpopular, geeky, middle age guy in the next cubicle at work that you have to say hi to but gives you the creeps. Marlow speaks in a weird, ancient language and the other vampires just shriek. Annoying.
Back to the movie... 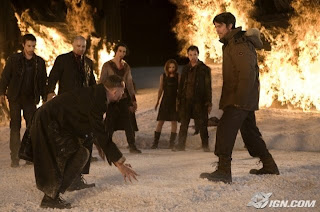 Josh is a sheriff and this weird dude (Ben Foster - who I remember from Six Feet Under as Claire art friend. Remember him?) comes ashore and starts creating havoc just as the town is shutting down for the 30 days of night. All hell breaks lose. He leads a group of survivors to a hidden attic where they will wait out the darkness.
There is dead dogs, beheading, blood galore, screaming, explosions, shrieking, feeding frenzies, ax murder, and a little vampire girl who is happily feeding on someone before she is killed. Even at the final show down I was waiting for the Lost Boys music to kick in.
None of this is enough for me to give this movie any more than a C+ and that is because I thought Josh was cute. The premise was good but the acting and directing were pathetic and the there were too many images of bloody children for my taste