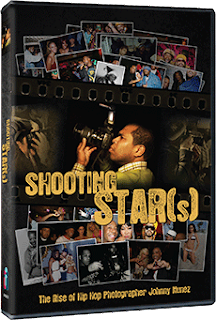 HOOTING STARS[s] -- In 10 years, Johnny Nunez went from sleeping in his car to being the world's most famous hip-hop photographer.  Now on the verge of becoming a celebrity himself, filmmakers Axel Ebermann and Daniel Frei have documented Nunez's incredible journey in SHOOTING STAR[s], a real-life urban fairytale following the prominent Hip Hop celebrity photographer, profiled in The New York Times and described as "hip-hop's Patrick McMullan".  The inspirational documentary portrays both Nunez's glamorous life as he mingles with prominent figures such as Russell Simmons, Al Sharpton, Kanye West, Swizz Beats, Ne-Yo, Kimora Lee and Fabolous, and the remarkable journey of a man who defied poverty and racism, and used his wit, tenacity and faith to pursue his American Dream.

This movie features a ton of Hip Hop and prominent personalities none  of which I am a fan of but I found the movie so interesting.

The movie is the story of Johnny Nunez a famous photographer for the Hip Hop crowd like Fat Joe, Lil Kim, Kid Rock, Snoop. Jayz and more.

He shows off his iconic photos, the ones he is most proud of why they are important.

Johnny was going to college for Radiation Oncology. He used to treat people for cancer. He was thrown out of school for radiation and ended up losing his apartment, with loads of school loans and almost losing his car he started delivering pizza.   Eventually he decided that he would create greeting cards for people of color since there was none on the market. He borrowed a camera and invited some Hip Hop friends to pose for his cards. He didn't make any money but found he loved photography.

He started getting gigs at local events for the Hip Hop crowd. He knew the lingo, knew how to hang, get the pose and work it! It is a talent to know your subjects and Johnny knew them and how to get the shot.

I found it fascinating. Johnny took a quick band-aid to his financial woes and created a successful business.


Disclaimer: I received a complimentary movie for my honest opinion.