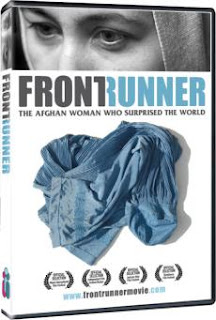 The setting: Afghanistan's first democratic election ever. In the aftermath of 9/11, America's military might has set the stage. But who will determine the fate of democracy in Afghanistan?
"Vote for the mother," Dr. Massouda Jalal shouts to the crowd.

FrontRunner tells the heroic story of this medical doctor and mother of three. As a children's advocate, she defied the murderous Taliban regime. Now, she boldly runs for president - the only woman in a field of 17 candidates. In a dramatic turn of events, she holds the fate of the country's first presidential election in her own hands.

Amidst death threats and bomb attacks, Jalal doggedly campaigns from the back of a taxi, in mosques, in homes, in busy markets and in the streets. Her courage shows that it's the dangerous work done by ordinary Afghans--women and men--that will determine the fate of a newly born democracy.


This documentary had me stressed. I know nothing of Dr. Massouda Jalal prior to this film but found myself hoping nothing happens to her. The thought that this woman bravely decided to run for the first presidency of Afghanistan during such turbulent times made me nervous for her.

I found it interesting to see the negativity surrounding her among some men who felt that a woman can't lead and the uprising of the people who bravely support her even though the police are tearing down her posters as fast as they go up.

Dr. Jalal, is a strong woman, A Doctor, A Teacher and a Presidential Candidate.  She wants to build social services and focus on economic development. She also wants to reconstruct Afghanistan, all the things the people need.  .Who would not want to vote for this woman?

It was also interesting to see how her supports make sure she is seen in the best light, focusing on how she looks on camera by starting with her speaking to a a male crowd instead of just being a woman with kids around her.

Dr. Jalal running after two decades of war to a under educated people is no small feat especially with 18 candidates.  Educating the people was important to this campaign and showing them how to elect their president became the forefront of the Afghan day.  Seminars, classes and movies were brought to the people to educate them on how to vote.  It is so emotional to see people who were never allowed to vote in their life time vote. Woman in their 80's were voting for their first time.

There was so much controversy surrounding this election especially with the ink that could be rubbed off voters fingers so they could come vote again. It was obvious that the Afghan people were passionate about electing their leader.

I highly suggest checking this movie out and educating yourself on the first Presidential election in Afghanistan and Dr. Jalal who is trying to jump start the mentality of those who were forced to take a back seat to the powers that be in their nation.  Never take your American right for granted. Thank God we are able to vote and not be silenced.

This movie is part of the Indie Pix Mix