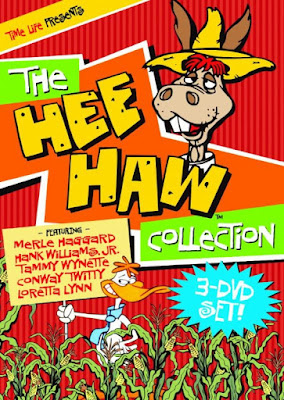 Television's longest-running comedy-variety show brought us hilarious jokes from Kornfield Kounty along with country's biggest stars, into America's living rooms for over 20 years Roy Clark and Buck Owens hosted the countrified ensemble show, pickin' and grinnin' and singin' and spinnin' with a talented cast of characters. Minnie Pearl, Grandpa Jones, Archie Campbell, and the rest of the "Hee Haw" gang traded knee-slappers and gut-busting one-liners in hilarious sketches including "Doc Campbell", "PFFT! You Was Gone" and "Gordie's General Store" - as well as the all-time favorites "Rindercella" and "Trigonometry". And because "Hee Haw" was a favorite stop for country's greatest stars, the collection features over 100 classic performances by country stars at the peaks of their careers, like Johnny Cash, Dolly Parton, Kenny Rogers, George Jones, Waylon Jennings, Hank Williams Jr. and so many more.

Maybe I am showing my age but I watched Hee Haw all the time and loved it as a kid. The skits were fun and every moment except the musical acts was really quick to keep you interested and watching.  Kind of like Laugh In or Sha Na Na but for country music loving folks.

These DVDs totally brought me back to my youth and I loved watching performances by Dolly, Conway Twitty, Tammy Wynette and Loretta Lyn singing songs I haven't heard in ages.

I kept thinking how different things were back then. Singers would come on these small budget shows to showcase themselves for their fans hoping to gain others all for album sales. I couldn't see this happening in this day and age.

There was definitely a cult following and I think at the time I didn't realize anything other than I loved country music and these were my people.

Now watching I see it was fun, witty, good clean fun with some of the biggest performers of the time.  The satire skits showed people who didn't take themselves too seriously and had a good time with each other. It was like one big family and that was how I felt watching it as a kid and now as an adult.