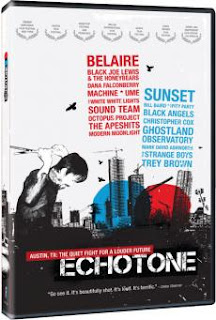 ECHOTONE - Internationally known as 'The Live Music Capital of the World,' Austin's music culture has led it to become one of the world's most sought-after destinations. As nearly two dozen high-rises pop up throughout the city amidst economic downfall, how does the working musician get along? This lyrical documentary, called, "an aural symphony of civic dischord with sublime visuals[3]" and  "the best (free) soundtrack we've ever seen[4]", provides a telescopic view into the lives of Austin's vibrant young musicians as they grapple with questions of artistic integrity, commercialism, experimentation, and the future of their beloved city.  Directed by Nathan Christ and photographed by Robert Garza, ECHOTONE is a cultural portrait of the modern American city examined through the lyrics and lens of its creative class.

A documentary on the music scene in Austin and how it is affecting Austin Texas. Austin has become the official Live Music Capital of the World and some aren't always happy about it.  While the city is facing economic struggles high rises are popping up all over Austin because of the influx of artists heading into the area.

Developers are hitting while the iron is hot and building 12 dozen high rise buildings but will this be a moment in time leaving the area with abandoned eye sores or will it become like California is for actors, the mecca for working machines in the Indie crowd.

As far as documentations go, I found this interesting especially since I am not interested in the Indie musician.  The soundtrack was great and I found myself hearing it above the interviewees. I also loved the editing of the hip titles and taglines when someone was being introduced. There were mometns of annoyance especially when some female singer blood-curled screamed into the mic. UGH...not necessary honey. Not necessary!

I would have like more balance focused on the people of Austin who are struggling with the rising cost of living due to the artistic implants.