MR. WARMTH! DON RICKLES: THE ULTIMATE TV COLLECTION - A MUST HAVE 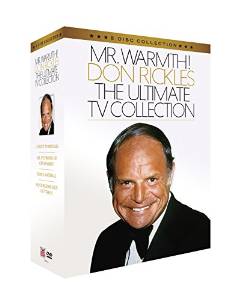 
HIGHLIGHTS INCLUDE
Movie spoofs of For Whom the Bell Tolls, Tarzan, Midnight Cowboy, and the Ten Commandments
A dramatic performance of a scene from Inherit the Wind with Don and Jack Klugman
Don instructing John Wayne in the art of joke telling
EXCLUSIVE BONUS FEATURES
Never-before-seen outtakes and unedited scenes
New introductions from Don
The Tonight Show clip with Johnny Carson's surprise visit to the CPO Sharkey set
Don receives the TV Land Awards Legend Award presented by Jimmy Kimmel

I sat down happily to review this collection of Don's shows including CPO Sharkey. Let me start by saying I am a huge Don Rickles fan. This is a wonderful collection of the best of Don!  I know a lot of people know Don Rickles as the voice of Mr. Potato Head in Toy Story but I have been watching him from the past 43 of my 49 years at least.

From the very beginning with Don Rickles, Don Adams, Harvey Korman and that hot guy who I can't remember...It was so fun. Just a bunch of friends sitting in chairs chatting with an audience. It seemed very real, unscripted and funny.

This is a great gift for anyone who loves Don or loves comedy.

I loved CPO Sharkey. Don played a Navy Chief Petty Officer in charge of new recruits.  The running jokes were usually about Don's height as opposed to his assistant Seaman Lester who was very tall.  My sisters and I loved this show!