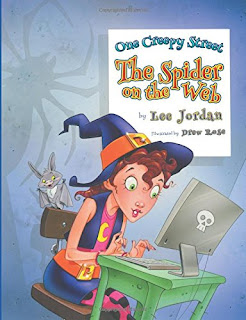 The internet is a terrifying place, with online predators, cyberbullies, and identity thieves lurking in every corner—and it’s laced with lots of young prey. When children use the web without supervision, they are exposed to a wide range of frightening situations.  Now, one father is on a mission to keep our kids safe by using a language they can understand—a cautionary short story with a rhythm and a purpose.

Jordan’s new campaign is a fresh take on internet safety. In One Creepy Street: Spider on the Web, he dives into the dangers of online games, social networking, and other seemingly harmless communications. Readers are thrust into the tangled web of an online predator who prowls the internet, targeting children and using games to lure in his unsuspecting victims.

Spider on the Web is a whimsically illustrated story that not only appeals to children of all ages but also teaches valuable lessons such as:


·         The perils of social networking and communicating online with strangers.
·         Why sending pictures and other information over the internet is a recipe for disaster.
·         How children can use their parents as online mentors, asking questions if anything seems creepy or suspicious.

I read this book alone and I read it to my kids. What I like about it is how it takes a really scary, very real subject that we know is happening by stories covered in the news for years and speaks to kids in a real way without scaring the bejesus out of them.

When I read it to the kids I wondered if they story was wrapped in such a nice, rhyming, fun, whimsical bow that they would miss the point of the story.

A witch is friending a spider child online and her bat friend goes with her to the mall to meet him. Her mom knows nothing about it but the spider is really an online predator who wants to catch her in his web. The cop who has been looking for this guy is Frankenstein and he is on his trail but will he get there in time?

My kids totally understood what was going on. They both stated that they know that they cannot give personal information out but that doesn't make me feel better because I believe until it happens and they can see that the person they thought they were friending was actually not what or who they said they were.

I've told them many times that while they think they are speaking to a 8, 10, 12 or 14 year old child, that person could really be an online predator that wants to hurt them.

This is a great tool for libraries, schools, counselors, parents or any caregiver of a child. They need to know that their are bad people out there and this book is a great source to open up a platform to discuss these people with your child.

Disclaimer: I received a complimentary copy for my honest opinion. No monetary compensation was offered or received