We recently got Netflix. It is awesome. 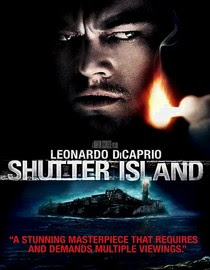 World War II soldier-turned-U.S. marshal Teddy Daniels (Leonardo DiCaprio) investigates the disappearance of a patient from a hospital for the criminally insane, but his efforts are compromised by his own troubling visions and by Dr. Cawley (Ben Kingsley). Mark Ruffalo, Michelle Williams, Emily Mortimer and Max von Sydow co-star in director Martin Scorsese's plot twist-filled psychological thriller set on a Massachusetts island in 1954.


Why You Should See This Movie: Leo DiCaprio and the supporting cast!


What I Can Tell You:
This isn't one of those movies you can put on and do things. You need to dedicate 2 hours and 18 minutes to it! Based on the book Shutter Island by Dennis Lehane.

I thought the movie was awesome. Leo is fantastic.Mark Ruffalo who I always appreciated is a great wing man.

The Year, 1954. Leo plays Teddy Daniels, a US marshal who is sent to Shutter Island (a hospital/prison for the criminally insane) with his new partner Chuck to investigate the disappearance of a patient Rachel Solando.

Teddy has flashbacks and dreams of his wife and the war that that haunt him both while asleep and awake.

About an hour in I turned to my husband and said I got it figured out. I did! I was right. But, the last 5 minutes of the movie had me scratching my head. It was the one line where Leo/Teddy says, "Which would be worse, to live as a monster or die as a good man?"

Now that the ending has been presented to me, there are many clues through the movie that nicely set up the twist. I really want to watch it again to see the twists unfold and see more than I saw the first time.


Since my reviews whether sponsored or otherwise are 100% honest, I have to admit there was about 20 minutes of the movie that I had to watch through my closed hand. It wasn't a consecutive 20 mins but a total of, where I couldn't "see" the images on the screen. Anything to do with children "not breathing" is really hard for me. I refuse to have these images imprinted on my brain so I mostly just ask my husband if it is OK to look.

Michelle Williams was awesome and disturbing at the same time.

Some memorable quotes that sat with me later were:

Warden: We wage war, we burn sacrifices we pillage and plunder and treat at the flesh of our brothers and why? Because God gave us violence to wage in his honor.
Teddy Daniels: I thought God gave us moral orders.
Warden: There is no moral orders as pure as this storm. There's no moral order at all. There's just this: can my violence conquer yours?

I think this movie is a 5 out of 5 stars. Great thriller, mystery. Very, very well done.