For someone who doesn't watch much TV, I spent the last 4 days watching movies. My library had some new releases that I wanted to check out.

The only reason to see this movie is Zac Efron. The premise is cute. What would you do differently if you were given to live your life over? Would you make the same choices you did the first time around?
While the premise has been done a bunch of times, this movie falls short. It was just kind of slapped together and while there are semi cute moments I could have missed this and been OK with it. Although the message of "you are in fact living your best life right now" was not lost on me. Everything happens for a reason is a saying most of us use for a reason.  I give it 3 out of 5 Stars

Synopsis: If you somehow had the chance, would you do your life over? Thirtysomething Mike O’Donnell (Matthew Perry) would. Then one mysteriously magical moment, Mike gets his chance. He’s suddenly back at Hayden High where he’s the star (Enter Zac Efron) of the basketball team, a total hottie, and a classmate to his own teenage kids…which gives Mike a chance to go from not-so-good dad to really cool friend.

This was an OK movie. Ryan Reynolds and Sandra Bullock are both very likable. What's not to like about Ryan Reynolds? (after all he did star in Maria's Eye Candy spotlight in 2006).

I found it funny that through the whole first 20 minutes of the movie Sandra Bullock's character (Margaret Tate) is supposed to be the boss from hell. "The wicked witch is on her broom" and "here it comes" are IM's sent throughout the office whenever she is on the move. I am here to tell you that Ms. Tate is far from the boss from hell. I know, I've experienced some of the worst.

Margaret is about to be deported back to Canada and Andrew (Ryan) her assistant is sucked into marrying her so she can keep her from losing her Visa. While the storyline is mediocre it is the cast that keeps you watching. Sandra Bullock, Ryan Reynolds and Betty White are fantastic in their satire and Mary Steenburgen and Craig T Nelson round out the stars of this movie. All of these stars have the likeability factor going for them. The Casting Director knew exactly what they were doing. 4 out of 5 Stars

Amazon Product Description:  Margaret Tate (Sandra Bullock) terrorizes her publishing house co-workers with her abrasive, take-no-prisoners management style, especially her overworked assistant Andrew Paxton (Ryan Reynolds). But when Margaret is threatened with deportation to her native Canada because of an immigration technicality, the quick-thinking exec announces that she and Andrew are engaged to be married. Ambitious Andrew agrees to go along with her scheme—if there’s a long-awaited promotion in it for him. Everything is going according to Margaret’s plan, until an overzealous immigration official makes it his business to prove that the couple’s engagement is bogus. To demonstrate her commitment to her new fiancé, Margaret agrees to celebrate the 90th birthday of his colorful grandmother (Betty White) — in Alaska. The editrix’s type-A ways put her at odds with her eccentric future in-laws with hilarious consequences, until the Paxtons teach Margaret a thing or two about family. 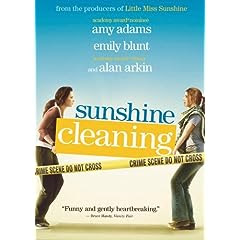 I really was looking for something fun and noticed this was under comedy so I grabbed it. I am here to tell you that there is nothing funny about this movie. Are comedies supposed to make you cry?  Two sisters whose mom committed suicide open a business together. They clean up after a death, murder or suicide.  Blood, vomit, body fluids, maggots you name it, they clean it. Finding the humor? Neither did I!
Amy Adams, Emily Blunt and Alan Arkin all are remarkable in this movie but I was seriously looking for something to make me laugh. 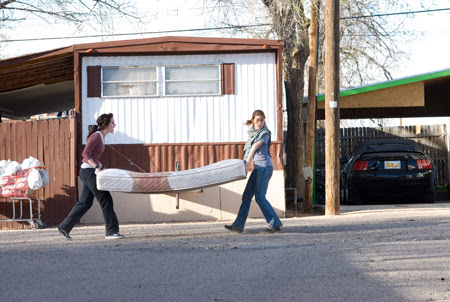 Acting wise amazing. Storyline great! Looking for a good movie check this out. Amy Adams and Emily Blunt are some of the greatest actresses out there right now. 5 out of 5.
Amazon Product Review: Academy Award® Nominee Amy Adams, Golden Globe® Winner Emily Blunt, and Academy Award Winner®Alan Arkin find an unexpected way to turn their lives around in this “colorful, refreshingly quirky comic drama” (Leah Rozen, People). Desperate to get her son into a better school, single mom Rose (Amy Adams) persuades her slacker sister Norah (Emily Blunt) to join her in the crime scene cleanup business to make some quick cash. With the help of their ill-fated salesman father (Alan Arkin), they climb the ranks in a very dirty job, finding themselves up to their elbows in murders, suicides, and… specialized situations. But underneath the dust and grime they also come to discover a true respect for one another, and create a brighter future for the entire Lorkowski family. 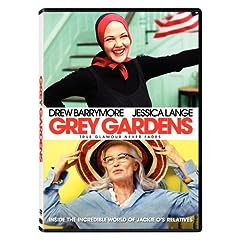 I watched this last night and wasn't really excited about it.  When I snatched it from the table to put it in, I thought grrr..."so not interested". That is before watching it. Since last night I have talked to over 5 people about Grey Gardens.

All I can say is WOW!!! Drew Barrymore and Jessica Lange were amazing! This true story of two relatives of Jackie Bouvier Kennedy who were aristocrats until their lives took a dramatic turn after Edith Sr's husband left her and  how they slid from 1930s high society to sharing rotting living quarters with litters of cats and raccoons. Amazing performances by both. I had to keep reminding myself that I was watching Drew Barrymore.  This is her best by far.

Funny that they won as I was watching this movie. I give this movie 5 out of 5 Stars.

"It is very easy to keep the line between the past and the present."

Based on the life stories of the eccentric aunt and first cousin of Jackie Kennedy, starring Drew Barrymore and Jessica Lange, Grey Gardens tells the tender, intimate story of an eccentric mother and daughter (both named Edith Bouvier Beale aka "Big and Little Edie"). They were raised as Park Avenue débutantes but withdrew from New York society, taking shelter at their Long Island summer home, "Grey Gardens ." As their wealth and contact with the outside world dwindled, so did their grasp on reality. They were reintroduced to the world when international tabloids learned of a health department raid on their home, and Jackie swooped in to save her relatives. Based on the lives that inspired the Maysles Brothers' classic documentary.