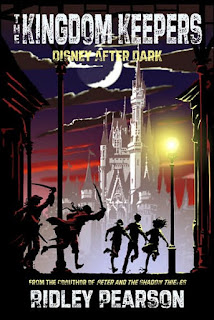 Amateur Book Review - Kingdom Keepers
I was supposed to start reading Eclipse by Stephanie Meyer, the 3rd book in the Twilight series but while waiting at the library for my son I spotted a book that I couldn't pass up.


Are you looking for a book to get your 10-15 year old boy interested in reading? This is the book.

Kingdom Keepers by Ridley Pearson (check out his official site), reads like a great action movie scaled down for kids. Think Goonies and Freddy Kreuger in Disney World.

Finn Whitman is one of five teens who are holographic hosts at Disney World. Their holograph image appear throughout the Magic Kingdom giving deliving information about the many attractions offered in Disney. All is well as Finn shines as a pseudo celebrity at school but when his dreams and reality start blurring as he experiences "crossing over" he searches to find out whether the other hosts are experiencing the same. Finn meets Wayne a retired Imagineer who tells him that he and the other hosts need to meet in dream world together to fight against the Overtakers. The Overtakers are lead by Maleficent the witch from Sleeping beauty.

Finn and the others go to sleep at the same time, meet up in Disney and work together to destroy the Overtakers.

The book is fast, interesting, fun and will hold the readers attention with mentions of the kids being attacked by the Pirates from The Pirates of the Caribbean. Traveling through the Magic Kingdom in the little cars from the Buzz Lightyear ride. And when the dolls from It's a Small World come to life and start biting the teens all hell breaks loose. Pooh and Piglet walking through Disney or Tom Sawyer smoking a pipe will just crack them up.

The postives: I love the story. It is interesting to think that digital hosts are real people and can see things that are not of this reality. All of the details about the Disney theme park make this an intersting read. The story is different and what kid wouldn't want to walk around Disney after closing? A little Disney history is always interesting and educational too.

Book 2 was released in August 2008 and I look forward to getting my hands on it.

If you have read or are reading this book, I would love to hear your thoughts on it.

The book was published by Disney, do I hear future movie????