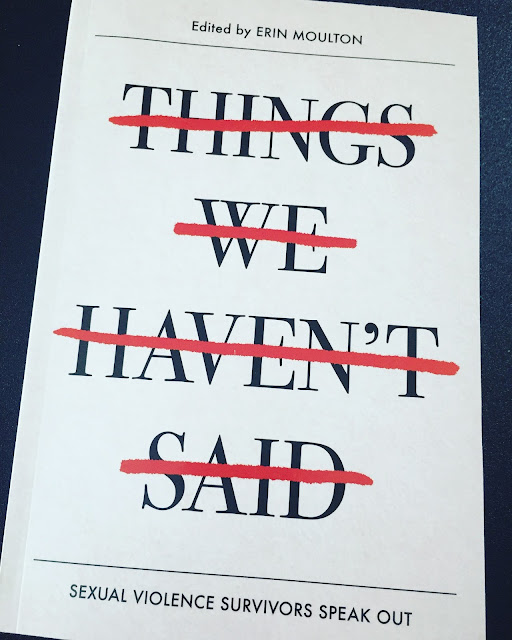 "There are days when I am less stardust than sawdust, less survivor than victim, but that does not mean that the reclamation of my own body is any less eternal." -Jane Cochrane

"I used to want to hurt you, to break you, to give you the sort of nightmares I still have so many years later." -Melissa Marr

"It's so easy to say you'll fight when it's not happening to you. But then it was happening to me. And I locked up. My bones had all linked together and I was still." -Bryson McCrone

Things We Haven't Said is a powerful collection of poems, essays, letters, vignettes and interviews written by a diverse group of impressive adults who survived sexual violence as children and adolescents. Structured to incorporate creative writing to engage the reader and informative interviews to dig for context, this anthology is a valuable resource of hope, grit and honest conversation that will help teens tackle the topic of sexual violence, upend stigma and maintain hope for a better future.


Made up of essays, poems, letters, vignettes, interviews, and concrete information, the book breaks the silence around sexual violence and verbalizes the experiences of these victims and, in doing so, creates a chorus of hope for children and young adults who have experienced similar abuse. Aside from being incredibly timely, the book is getting great buzz. It just got a starred review from Kirkus."This book will save hearts. This book will save minds. This book will save lives," says author A.S. King of the collection. And all of the author's proceeds from the book will go to survivors' organizations.

Definitely a difficult read. I was worried about being triggered by some of the stories (it's has been years but it can happen). Fortunately that didn't happen but what did happen was how hearing these stories made me angry. Angry that anyone has to go through this.

The stories included were very candid and sometimes made me uncomfortable. They were more candid than I have ever been when I discuss my own abuse and made me feel that I haven't been honest enough at times. Honest with myself yes but maybe speaking about the details would have helped me heal a lot sooner than I did. I have talked about my own abuse for years but not "really". All the details have been left out of my story. I need to release them. I need to make a point of talking them over with someone.

After each story there is a small interview where the women answer questions about who they told, who heard them, what was most helpful during their recovery and more. What worked here is that each survivor's story has a follow up questionnaire to their writing piece giving you even more information to where they are now and providing other survivors with other resources.

The brave woman in this book who told their stories in their own words and in their own way are heroes. I hope that anyone who reads this who has been silent will find their own voice and use it so make sure that are never hurt, disrespected, or scared again.