“Warner Bros. Home Entertainment provided me with a free copy of the Blu-ray for this Blog Post. The opinions I share are my own.” 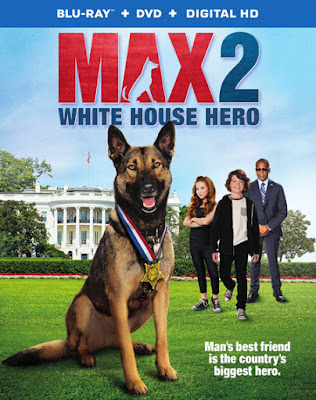 BURBANK, CA (March 14, 2017) Your all-time favorite canine hero is back in an all new feature length movie!  Warner Bros. Home Entertainment brings you MAX 2: White House Hero on DVD and Blu-ray Combo Pack on May 23, 2017. The Digital HD will be available on May 9, 2017. The original film, MAX, released by Warner Bros. Pictures and Metro-Goldwyn-Mayer Pictures, was a box office hit and went on to gross $43 million in the U.S.

Starring Zane Austin (Unremarkable), Francesca Capaldi (Dog With A Blog, The Peanuts Movie), Carrie Genzel (Watchmen), and Lochlyn Munro (White Chicks), Max 2: White House Hero is an uplifting film about family, friendship, and a four-legged hero. The film runs 80 minutes and is also filled with 15 minutes of extra treats including a behind-the-scenes featurette, "Kids on the Case: Making of Max 2," and a canine blooper reel, "Max 2: A Ruff Life." MAX 2: White House Hero will be priced to own on DVD at $19.98 SRP and on Blu-ray including Digital HD at $24.98 SRP.

Duty calls again, and our hero dog Max returns to action in "Max 2: White House Hero."  His new assignment brings him to Washington, D.C. to serve on the U.S. president's Secret Service detail. When a foreign leader arrives with his precocious daughter Alex (Francesca Capaldi), tensions arise between both countries.  First Son TJ (Zane Austin), along with Max and Alex, uncover a dangerous plot that puts both kids and both nations in jeopardy. A highly-sensitive mission will push Max’s specialized skills, intelligence and loyalty to the test.

"Max 2: White House Hero is a heartwarming film that is a must-own for families and animal lovers alike," said Mary Ellen Thomas, Vice President Family & Animation Marketing. "Following the success of the first film, MAX, we think fans will fall in love all over again with one of Hollywood's most heroic dogs."

Enter to Win Max 2: White House Hero on Blu-ray
Fill out the form below for a chance to win. This Giveaway is open to US residents ages 18+ ONLY . The giveaway will run for 2 weeks. The winner will be notified by email and have 48 hours to respond email before new winner is chosen.