It started out as a great morning. It was Handsome's 14th Birthday and he was so happy and excited. All was well until about 8:00 A.M. when I heard some snit about my son being video taped and shared on Snapchat taken during recess. Two videos by girls in a grade above him with something like "whose mans (not a typo, they said mans) gets their hair cut like that?" The other was "who runs like that?" With laughter in the background.  Cyber bullies picking on a kid for being different in an unpoliced world like social media. Nothing new but it breaks my heart.

UGH...anyway..long story short, call to the school to report it. Feelings of hurt, anger and a momma bear instinct to protect my Autistic, innocent boy from the mean world. I tried to spend my day with my 10 2 year old toddler at work. They need me too and I want to be there for them. I cuddle, rock, hug, pick up and kiss them all day long.

I got Handsome and Goddess from school and he is in a great mood excited to head to Game Stop to use his birthday money from his Aunt on a new headset for Xbox One and his dinner of choice, Kentucky Fried Chicken.

We get home and around 6:00 PM I get a call from my Uncle to inform me that my Grandpa had died. Grandpa was 98 years old and had recently fallen ending up in the same rehab as his wife my 99 year old Grandma. They were not sharing a room but were right next door to each other. He was very good to my sisters and I growing up. Tractor rides, candy, money, trips to Toys R Us with a get whatever you want speech and always sweet. I can still hear his voice in my head. "What? You're talking tooooo fast, slow down". He was the polar opposite of my other grandpa. I am so sad to say good-bye. Grandpa had buried my mom, his first born when she was only 34 and my Uncle his baby when he was only 32. So my thoughts going to bed last night were that they were all together.


According to my Uncle he never woke yesterday. He had oxygen over his face when my uncle stopped by and was sleeping so my uncle went to my grandmother. In the dining hall. The nurses went to my uncle who was helping grandma with lunch to tell him my grandfather had passed. He never woke and went quietly and peaceful. My uncle told grandma who said "already! So soon!"

I believe grandpa went way before lunch. This is going to sound strange but I was laying awake in bed yesterday at 5:00ish yesterday morning when I felt someone lean on my bed. There was a small hug and I thought it was Skye coming to crawl into bed even though she hasn't in months. When I put my hand out no one was there. I was creeped out for a moment and pulled the sheet over my ear. Yup still scary even as an adult but going to bed last night that moment brought me peace. Maybe grandpa was saying goodbye. I will hold onto that thought until my last breath. 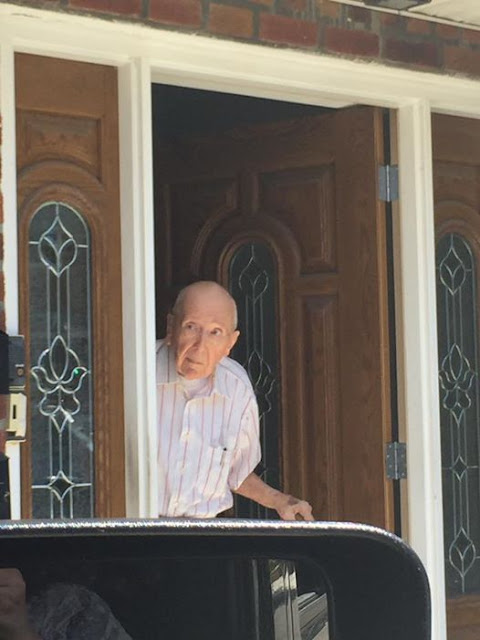 This is the last photo I have of him.  He waved good-bye to us pulling out of his driveway last time we visited.