The Laurie Berkner Band Is Back With New Original Songs #laurieberkner 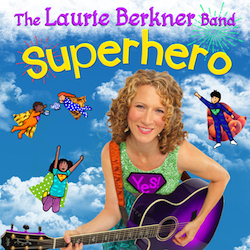 Laurie's new album, Superhero, was just released.  This is her first album in eight years to be comprised entirely of all-new, original Laurie Berkner songs.   Laurie's fans are understandably excited.  It's the album they've have been waiting for.

In the course of a nearly twenty-year career, Laurie has, herself, become a superhero to a multitude of kids.  People called her "the queen of children's music." USA Today said Laurie was "the undisputed queen of kindie rock."  According to Time Magazine, Laurie is "a kind of sippy-cup Sheryl Crow."  The Washington Post wrote, "Jimmy Buffett has his Parrotheads.  The Grateful Dead have their legendary Deadheads.  Laurie Berkner has, um, Dino-heads?"  The Los Angeles Times declared, "Laurie Berkner does what Fred Rogers did:  respect, validate and reassure young children."

I have an 11 and 13 year old and have been listening to Laurie for much of their childhood and now that they are grown and have their own taste I have been sharing my love of Laurie's catchy hook driven, preschool songs with my preschool class. In the morning during circle time the kids (2-3 year olds) and I sing Bumble Bee and We Are The Dinosaurs while moving our bodies, laughing, clapping and smiling along to Laurie.

Superhero contains 21 new songs plus 2 bonus songs all written for ages 1-7. I cannot wait to bring it into work.  Written by Laurie and containing songs about bicycles, tea parties and fireworks this CD will get the kids moving and grooving. Superhero contains many music styles like 60's pop, lullabies, reggae, Latin and even a duet with Ziggy Marley.

I think my class will love the title song Superhero where we can pretend to be Superheros during our morning stretch as well as This Is How I Do It which has Laurie singing about jumping, spinning and flying like a butterfly. Perfect for kids to move to. I am already thinking about ways to incorporate this into our daily circle time. Umbrella, Elephant In There, The Music In Me, In and Out Take A Trip,  will be great too!
Over the past week I have been singing Bubbles which reminds me of the Go Go's in the car while driving the kids to school and I was thrilled to hear she included a dance remix of We Are The Dinosaurs! It is an absolute favorite but I think my preschoolers will love the original better.

If you have little ones check out Laurie. Her music is so much fun, she has a great voice and the songs really do get kids moving which is so much more important these days with so many kids addicted to their screen time.

Visit The Laurie Berkner Band site for concert locations and dates and so much more.