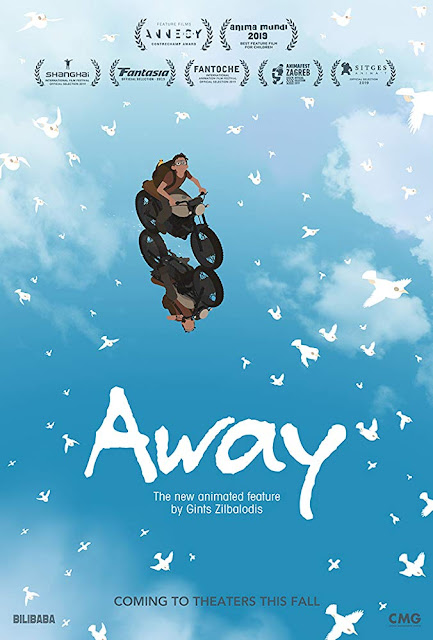 Away An Animated feature film by Gints Zilbalodis Opens on Friday.

AWAY is an amazing feature length animated ﬁlm; written, produced and directed entirely by one very talented person: Director and Animator, Gints Zilbalodis. Gints worked on the ﬁlm for three and a half years, writing the fascinating story, creating the beautifully animated landscapes and characters, and composing and recording the enchanting music to the ﬁlm.

The story is about a boy traveling across an island on a motorcycle, trying to escape a dark spirit and get back home. Along the way he makes a series of connections with diﬀerent animals and reﬂects on the possible ways he ended up on the island. Part dream, part reality, and in a way, the story-line/narrative is a reﬂection of the creative process of the making of the ﬁlm itself. The main idea of AWAY is our common, universal need to ﬁnd a connection.

“I’m very happy to have ﬁnally ﬁnished the ﬁlm after so many years... And I can’t wait to share it with the world because watching ﬁlms in a theatre is the best way to create a connection with people.” – Gints Zilbalodis

Memorizing scenery as a boy wakes dangling from his parachute way above the ground. A large, dark being walks toward him but he gets away. We follow his journey as he and his rescued bird friend try to find a way home with the threat of this dark presence throughout the movie.

Such a smart well done movie that had me glued. The 3D animation is OMG and the soundtrack beautiful. It is a perfect movie. No dialogue means it can be viewed by anyone and be understood.

My daughter came in while I was reviewing and watched with me. She kept mentioning the animation and how awesome the animation is. My husband came in from work and asked from downstairs if I were playing Myst a game from the 90s. He said the music reminded him of it.

Truly a masterpiece created by ONE person. 25 year old Gints Zilbalois wrote, directed, produced and composed all of it. He is a true genius