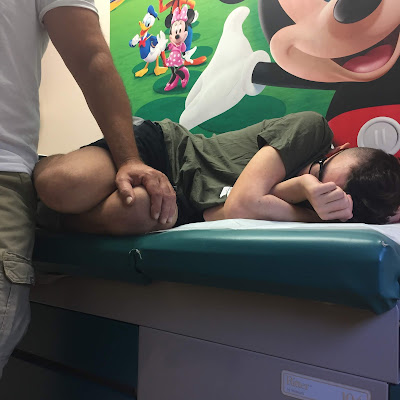 I write this for myself and anyone interested in reading. I use my blog as a journal and print it out every year.

There is nothing scarier then when something is medically wrong with your child. The past few days have been horrifying. I don't know how I held it together watching my son go from a healthy teen on Monday to a weak, frail boy who couldn't use his legs. I truly can't even type the things that were going through my mind as we headed from doctor to doctor for a diagnosis. Here is our story.

My son woke on Tuesday morning telling me he was feeling dizzy. He asked for breakfast which he ate at his desk and seemed okay but quieter and weaker than normal. He spent most of the day in bed or playing a game on his computer. I assumed dehydrated and pushed fluids.

He ate his lunch when he woke still complaining about feeling dizzy and said he was going to lie down cause "that is all I can do." I assumed that maybe he has been burning the candle at both ends on Summer vacation. He plays, goes for walks, goes to sleep about 2 waking at 9ish to do it all again.

When he threw up his dinner I told him we would be going to the doctor in the morning.

My husband came home and said, check his because I heard a bang last night at 1 that woke me from my sleep. Maybe he was doing something stupid and hit his head.

I headed into my son's room with a thermometer to take his temp for the 100th time of the day. As I handed it to him I started feeling for bumps and asking if he hurt himself last night. He said, "I felt dizzy and hit into the wall with my ankle." I asked if he hit his head he said no. I didn't feel anything and once again there was no fever.

The next morning, Wednesday I headed to his room and asked him how he felt. He said horrible. It was only 5 and I wanted to take him to the hospital. He wasn't for it but I told him if we wait for the doctor who doesn't open until 9 we may not get in but if we go to the ER he would be seen and we could know something before 9. I asked him to go to the bathroom before we left but when he went to get up his legs couldn't hold his body. He was shaky, weak, and looked totally off balance. I yelled for my husband and told him that he can't even walk. He needed complete support to walk. My husband had to hold him around the waist and my son's arm was around his neck. It was the scariest thing to watch. Worse than when he was a baby learning to walk.

We ended to the emergency room and after a few hours was sent him with a Vertigo diagnosis, medicine for motion sickness and some exercises. I asked for Lyme tests and inner ear issues. They saw a teen with balance and weakness and ran a complete drug panel. They of course were all negative.

He spent the day sleeping and I set up a follow up appointment for the pediatrician. In the morning, he was no better and needed 100% support to walk. I watched his legs and it seems they couldn't hold him up. He was unsure of his steps and looked like he would fall at any moment.   He couldn't walk at all. Each step was a knife through my heart. It was as if he was trying to walk. How could this just happen?

The pediatrician was wonderful. His chems all checked out. There was nothing in his blood to say he was fighting something but he is confused, can't focus and can't walk. Her only concern was there were crystals in his urine which she said was from dehydration.  This wasn't normal, a healthy kid doesn't just stop having the ability to walk so she got paperwork ready for an MRI. On our way home we got the call to head over to a center for an MRI. 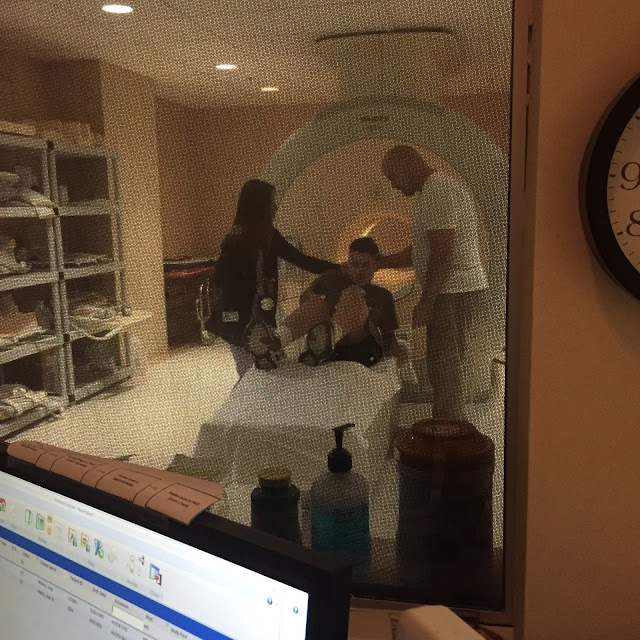 During the MRI my son was amazing. He did everything that was told to him. Answered all questions. Endured many pokes with a needle and lied still in the MRI so we could get a good reading.

The whole time I was texting my daughter who was not answering me. She had been asleep when we left. I mentioned what we were doing to which he nodded but I didn't know what she had heard. So now I was worried about two kids.

We waited in the waiting room for someone to read our scans and get back to the pediatrician. After an hour we were called to the phone. The pediatrician wanted us to know there was an abnormality in the cerebellum and that she was contacting a Neurologist for us. She would call us back.

An abnormality! What?! I was crazy with worry. My boy has an abnormality in his brain! I was scared for his future. Worried about our next steps and praying for answers.

We got home. Took our shoes off and before I had time to think the phone rang and my pediatrician told me that there was a Neurologist at Maria Ferari Children's Hospital in Westchester that wanted to see my son.

Thankfully my daughter already had a scheduled sleep over at a friends. I asked her to over pack and bring the house key in case she had to come back to feed the cats. I asked a friend to pick her up and was beyond thankful that I didn't have to worry about her.

We got to the hospital. Filled out forms in the ER and were in an ER room within 15 minutes which is where we sat from 4 PM to 9:30 PM. In that time, my husband started getting a fever and my son slept, got poked more with needles, answered the same questions 500 times, and was asked "can I see you walk?" 300 times. He is a rock star. I was never more proud. He answered all their questions. Tried to walk for anyone who asked and never complained. Way better than dad and I who were so tired and done. None of us had eaten. My son ate toast for breakfast at 6, Burger King between the MRI and going home for 5 minutes and now it was going on 9 and we were so DONE!

Each time someone new asked for the story I started at Tuesday and ended at the hospital. I found out later they are looking for consistency. They want to make sure the story is always the same and that nothing is being added or missed. We were finally told at 9:10 that we were staying for observation not being admitted but they wanted to watch him. I asked for an IV because everyone was saying he was dehydrated and he hadn't gone to the bathroom since we left the house in the morning. 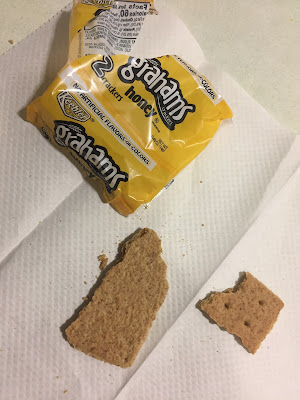 The room was okay but for spending the night really sucked. We had our own bathroom with a shower, my son's bed, a love seat, desk and two hard back chairs. We were too tired to care. The nurses and doctors were great and made my son smile. We were given blankets and toiletries. Told where the snack drawers were and sent to bed. We were hungry. My husband headed out to find a convenience store and I headed to the drawers. I found crackers and juice. My son eat 4 crackers, a graham cracker and drank 2 apple juices. My husband called 15 minutes later saying he got lost and was on his way back with nothing. I got him so crackers and a juice. He brought my son a package of chips from the snack machine and an apple juice.

Sleeping was awful and if you ever stayed in a hospital you know it. They come in for vitals a few times. The love seat had the air condition right on it so you froze and the chair didn't recline. We took turns on the various seats to sleep. My husband had an obvious fever at this point and was freezing and sweating. UGH! One more thing to worry about.

In the morning I headed down for breakfast sandwiches, coffee and medicine for my husband. My son ate his breakfast and my husband's breakfast and also 1 full IV but had not gone to the bathroom yet which was a concern to me because I was told his urine was very dark. 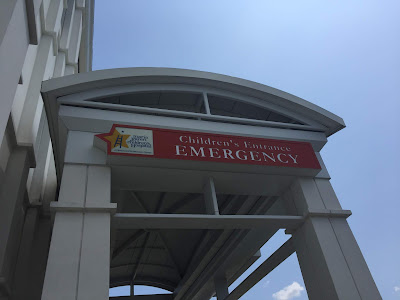 Eventually the team came in and assessed him. I was told that the ABNORMALITY on the MRI is believed to be  "artifact” and now believe the reason is he may have had a viral infection. The Neurologist sat nose to nose with my son and put both hands on my sons head. He told him "do not stop looking at my nose. Never take your eyes off my nose." Then he turned my son's head right then center repeatedly. Next he did it with the left side. As he was doing it he said to the team "did you see that?" They all said YES!  He asked us and we said no. He had us move center and did it again right then left side. My husband didn't see it but I did. It is so small but there. On the right side my son could keep his eyes on the doc's nose. On the left; the tracking was off by a millisecond. But off. 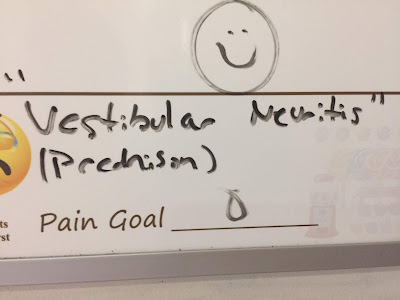 The doctor turns to us and says, "This is very treatable he has Vestibular neuritis. It is inflammation on the vestibular. This is why he has been experiencing severe vertigo, dizziness, balance problems, and confusion. He will get a treatment of Prednisone.  I can't tell you how long it takes to go away. If I give you a date you will get nervous if it isn't gone by then. If you talk to people who have had this they will tell you that they still experience it once in a while.
When I googled Vestibular Neuritis I found that it is a condition that causes vertigo and dizziness. It results from inflammation of your vestibular nerve, a nerve in the ear that sends information to your brain about balance. When it’s inflamed, this information isn’t properly communicated, making you feel disoriented and confused. 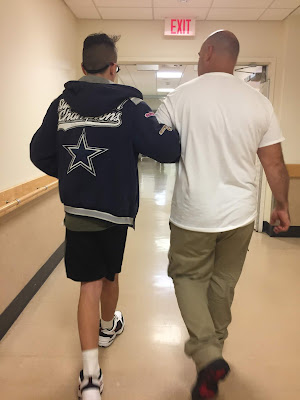 OMG...it makes sense. I have a diagnosis and medication. It is horrible watching my son try to walk but he walks better today than he did Tuesday and he was able to walk out of that hospital with assistance instead of being carried along. These were the scariest days I have ever faced in my life. I wish I could wave a magic wand and it would all be better but at least we are going up a hill and not a mountain.