WHAT WOULD DOLLY DO? How to Be a Diamond in a Rhinestone World - Feature & Review 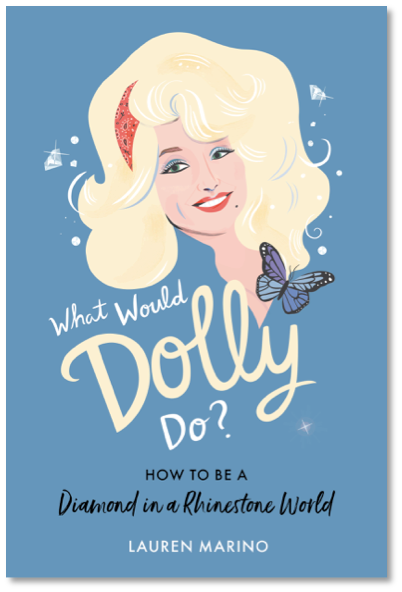 Known for her big hair, big smile and big…personality, Dolly Parton runs a $650 million empire with brains, heart and an unrelenting positivity. This love letter to the multi-faceted icon shares the many lessons we can all learn from this one of a kind role model


From the foothills of the Appalachian Mountains, she became an international superstar, a successful businessperson and philanthropist, the epitome of the American Dream. Her unrelenting positivity and belief in everyone’s ability to overcome adversity through grit, faith, a strong work ethic and a big heart got her out of poverty. How did she do it? Part biography, part words of wisdom, with a few recipes and beauty tips thrown in, this book is meant to inspire readers to tap into their inner Dolly and put wings on their own dreams.


-Kevin Costner didn't want “I Will Always Love You” as the anthem for The Bodyguard, which Dolly had written and performed as a hit years before. He took some convincing before Whitney Houston made it into a huge #1 hit which set up the marketing campaign for the popular movie.

-Both Reese Witherspoon and Kristin Chenoweth claim Dolly as their childhood –and ongoing – role model. Reese created a “What Would Dolly Do?” tote bag for her lifestyle company Draper James, which sold out almost immediately after going on sale and Kristin has an album of the same name and often pays homage to Dolly in monologues and songs in her performances

-Dolly was a producer of the successful television show BUFFY, THE VAMPIRE SLAYER

-She is the founder of the Imagination Library which has given over 100 million books to children under the age of five since its inception; it is one of the largest literacy programs in the World. She was recently honored at the Library of Congress


Lauren Marino is the former founding editor and editorial director of Gotham Books, where she published multiple bestsellers and award-winning books. She is the author of Jackie and Cassini and has collaborated with celebrities, doctors, psychologists, entrepreneurs and other experts on their books. She lives in New York City.

As a child I grew up with whatever my parents listened to. Eventually my dad got into The Commodores, Peaches and Herb, Village People, and Motown while I liked it it wasn't what I wanted to listen to. Eventually I found a Country Music station that I could almost hear and was turned onto Dolly, Barbara Mandrell, Conway Twitty, Willie Nelson and more. The songs spoke to me. They were life and Dolly's Here You Come Again was the first country album I ever purchased.

It was interesting how Lauren took information, tidbits and biographical information about Dolly and put it into a book that feels like Dolly contributed to it while also serving as a fan written book full of Dolly's wisdom, quotes, personality, and life lessons making it totally relatable to the reader.

If you love Dolly, you will love this book.

WHAT WOULD DOLLY DO?
How to Be a Diamonf in a Rhinestone World
By Lauren Marino