The Twisted Ones (Five Nights At Freddy's) 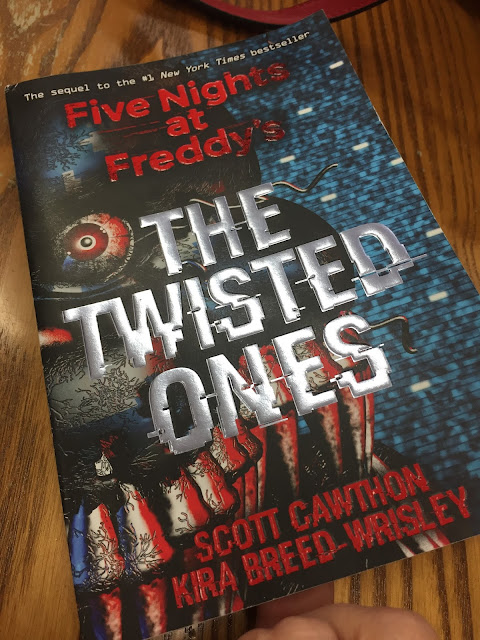 The highly anticipated sequel to the bestselling Five Nights at Freddy's: The Silver Eyes.

It's been a year since the horrific events at Freddy Fazbear's Pizza, and Charlie is just trying to move on. Even with the excitement of a new school and a fresh start, she's still haunted by nightmares of a masked murderer and four gruesome animatronic puppets. Charlie thinks her ordeal is over, but when a series of bodies are discovered near her schoolbearing wounds that are disturbingly familiar she finds herself drawn back into the world of her father's frightening creations. Something twisted is hunting Charlie, and this time if it finds her, it's not letting her go.

Over the past 3 years my kids were so into Five Nights At Freddys. Over the past 1 year My Goddess has kinda slowed down and only occasionally plays it but my Handsome is still obsessed so I was super interested in reviewing this.

Five Nights At Freddy's is a fictional pizza restaurant where animatronics are out to kill you.  In the game you play as the security guard who must survive the night at Freddys. The game has many jump scares as does The Twisted Ones. Even though I never read the first one this book stands alone as a sequel. I was filled in enough to get through the book and really enjoy it.

I never played the game and absolutely loved this book. Charlie is the main character. Her dad owned the pizzeria and since it closed after horrific deaths by the animatronics. There is a ton of suspense and I was very entertained. I loved all of it. Not really a mystery fan but loved trying to figure it all out with Charlie. There are some frightening scenes where the animatronics are coming out of the ground and bodies are found that have been inside the animatronics but any kid who has played the game is ready for this. Jump scares is what it is about. I read it, my son was excited to read it but I got him the first one to start entitled Silver Eyes. He is loving it and I can't wait until he finishes so I can read it even though I did things backwards.


Look for this in my Holiday Gift Guide.