Not sure if I have talked about this at length or even if I talked about it in the blog world but I know I mentioned it on Facebook.

This year on my Handsome's 14th Birthday my Maternal Grandfather passed away. Grandpa was 98 and lived a very long time. He buried two children and lost a lot of friends and family along the way.

He was very good to my sisters and I growing up. Tractor rides, candy, money, trips to Toys R Us with a "get whatever you want" speech and always so sweet. I can still hear his voice in my head. "What? You're talking tooooo fast, slow down". He was the polar opposite of my other grandpa. I am so sad to say good-bye.

I hear he never woke yesterday. He had oxygen over his face when my uncle stopped by and was sleeping so my uncle went to my grandmother. (They were both in the same rehab home). The nurses went to my uncle who was helping grandma with lunch to tell him my grandfather had passed. He never woke and went quietly and peaceful. My uncle told grandma who said "already! So soon!"

I believe grandpa went way before lunch. This is going to sound strange but I was laying awake in bed yesterday at 5:00ish yesterday morning when I felt someone lean on my bed. There was a small hug and I thought it was my daughter coming to crawl into bed even though she hasn't in months. When I put my hand out no one was there. I was creeped out for a moment and pulled the sheet over my ear. Yup still scary even as an adult but going to bed last night that moment brought me peace. Maybe grandpa was saying goodbye. I will hold onto that thought until my last breath.

Grandma who is 99 is living in a home and doing well. I don't know that she truly knows where she is but she seemed okay when I went to see her.  She seemed to know that she knew me but not sure she knew exactly who I was. She said, "I though you were coming earlier. Are you sleeping over?" We went to a private family area which is like a small balcony atrium and she said she and Artie have been coming here since before they were married. I think she was in Millbrook which is where they had their summer house.  She mentioned that she never sees any animals. No deer or even a cat. We were on the 4th floor but she can only see trees and sky from the windows.

She asked if I was thirsty and told me to help myself to something in the refrigerator. There of course was none. She mentioned my cousin Jerry who she said was also supposed to come. Jerry is in a hospital with a brain tumor and they haven't talked in months. She asked who my friend was. It was my husband. It was so very sad for me to sit there not knowing what she could see or hear.

She was occupied with her hand which hurt her. She said maybe she was getting in fights at night. I think she slammed it on the hospital bed bars. God bless her. She seems happy. She asks about my grandfather and has to be reminded that he passed away. She says 'Oh yeah. Whose going to take care of me now?" UGH...my heart hurts when I think about it. Not because she was the perfect grandma and made me feel safe and warm. She wasn't and didn't. Not because she always had something nice to say. She didn't. I was so thankful to have her in my life. She is my family. Who else got cards, letters, phone calls and the occasional surprise check at 50 years old? She is old, alone and NOT in her home. She is a human being and I worry about her safety and hope she is being taken care of in the very best way. I told her I loved her before I left. I don't know if she heard me but I meant it with all my heart. 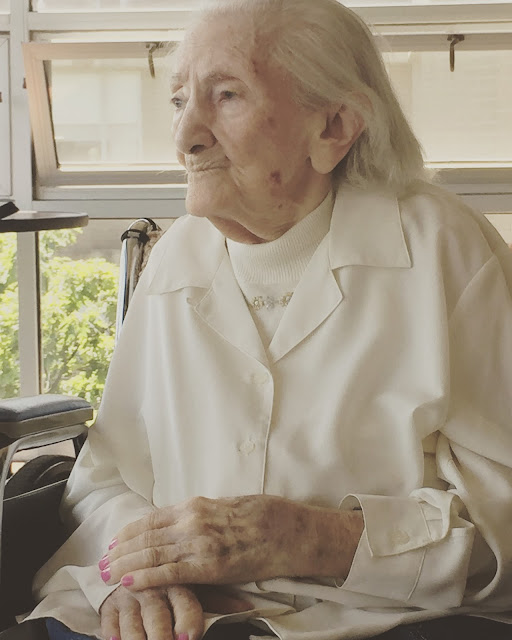 My uncle is selling their home since Grandma will not be leaving the rehab she is in. He told me to come over and collect anything I wanted. It was the strangest feeling to go through their things. At almost 51 I have never walked into their home and opened up their drawers or closets and now I was going to open every box, closet, search every drawer and cranny to make sure nothing of importance was left behind.  My only focus was photos, movies and mementos.

Here are a few of them that I absolutely love (it is so strange to see pictures you have never seen before).

Email ThisBlogThis!Share to TwitterShare to FacebookShare to Pinterest
Labels: life