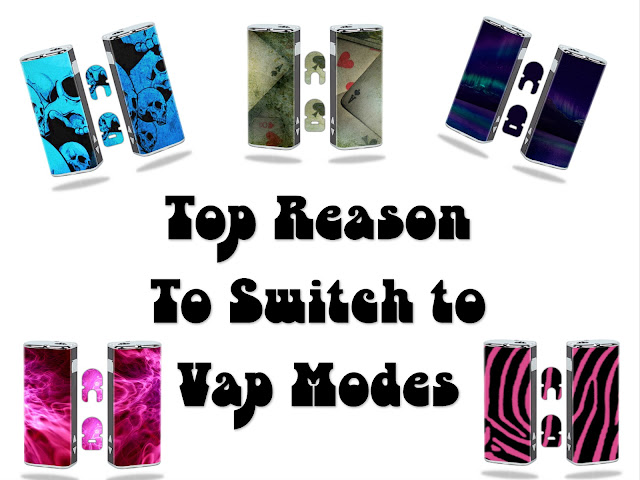 There are many different ways to vape. That is to say, a wide variety of implements have been invented in recent years to use for vaping, from vape pens to boxes, e-cigarettes to atomizers. One of the newest additions to this selection is vape mods, which are literally modified versions of those other vaping instruments. While regular vaporizers function adequately for most average users, some true vaping enthusiasts find standard vaporizers insufficient at meeting their needs.

Issues some vape users have found with standard vaporizers that have led to the development of vape mods include:

●      less durable design that wears easily after frequent use;

It is this final factor—the ability to customize heat settings—that brings safety to the fore when using (or deciding whether to use) a vape mod instead of a standard vaporizer. It is still possible to combust a substance in a vaporizer, and even more possible in one modified to permit the user to increase the heat to their desired settings.

For example, a new subculture of people who vape called “Cloud Chasers” compete to see who can produce the biggest, longest cloud of vapor when they exhale. Vapor, in its truest form, is invisible. Therefore, the more visible the cloud ejecting from a person's mouth after vaping, the more smoke there is in that cloud. Turning the heat up on a vape mod without a clear awareness of the proper vaporization temperature and combustion point of the substance you're vaping could cause you to inhale smoke along with or instead of your vapor, thereby, in essence, defeating the entire health purposes for vaping in the first place.
What Exactly is a Vape Mod?

Vape mods are made for all types of vaporizers, from handheld to tabletop models. In its most basic form, a vape mod is simply a metal tube with a battery chamber and a button that, when pressed, creates a circuit that produces a current. This current can then be used to power any number of atomizers attached to the unit.

The fundamental mechanical advantage of a vape mod is that it contains no wiring or electronic components of its own, and therefore possesses none of the disposable parts that can break and cost loads to replace. By the same token, by using a replaceable battery instead of the built-in battery powering most standard vaporizers, the device itself doesn't become useless all of a sudden when its battery runs out, or require an expensive component replacement.

Other vape mod safety tips regarding battery usage include:

●      to use quality batteries and chargers rather than the cheapest you can find;

●      to employ an inexpensive multimeter to keep tabs on battery voltage, as well as resistance through your chosen devices;

●      to remove batteries when not in use to prevent both drains and leaks, as well as to maintain the strength of the spring holding them in place;

●      but not to let the batteries touch each other or any metallic objects, such as keeping them in your pocket or purse, lest they interact and spark, or worse;

●      to recharge discharged batteries as soon as possible;

●      to test your batteries occasionally prior to use to make sure they're performing properly;

●      most crucially, to prevent hazardous short circuits by avoiding overcharging;

●      and of course, to always dispose of exhausted batteries properly.
All this is not to turn you away from considering a vape mod for yourself, however. On the contrary, a vape mod can empower you to use whichever substances you like in your vaporizer and reap each of their benefits optimally and safely. It just takes a bit more of a learning curve to get accustomed to than a standard vape pen or other vaporizer with a single heat setting.
Bio -

This guest post is courtesy of MightySkins, a custom vinyl wrap and skin company featuring items like mod skins, sigelei skins and istick skins as well as other assorted wraps for electronics.