Secrets Of A Fangirl by Erin Dionne 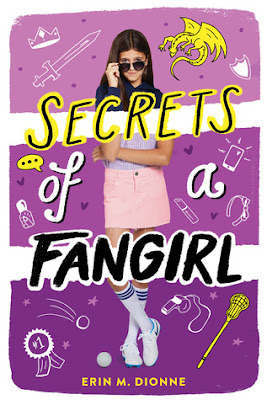 Sarah Anne loves lacrosse, and the MK Nightshade series that everyone was obsessed over in grade school. The problem is that she's still obsessed, which is way too nerdy for a popular kid like her. So she hides her geekiness with a set of rules meant to keep her geek and jock selves separate.
Except when she's offered a spot in a Nightshade fandom contest, where the winner gets to see the new movie premiere in LA. No one seems to think Sarah Anne can win, since she's up against a pair of guys in high school--but the more she's called a fake fan, the more determined she is to wipe the floor with her competition. As long as none of her friends or anyone at school knows what she's doing.
Can she keep her geek identity a secret, win the contest, and manage to keep her friends even though she's been living a lie? Sarah Anne is going to have to make some choices about what's truly important to her and which rules she's going to break to stay true to herself.

I loved everything about this book. Sarah is my kind of chick. She isn't looking to share her whole world with everyone in fact she has a pretty big secret. She is in a contest for her favorite book series entitled MK Nightshade. She won a trivia contest against two boys and now she wants to prove that she is NOT a fake fan like the folks at the contest seemed to think but but the biggest fan.  Her knowledge of her favorite books is deep and she will let nothing keep her from winning this contest and proving herself.

What I loved about Sarah is she didn't let anything stop her from her goal. It is about time there was a book about a strong girl who doesn't need a boy to make her feel whole. LOVED IT!

The Pepper Party Picks The Perfect Pet by Jay Cooper 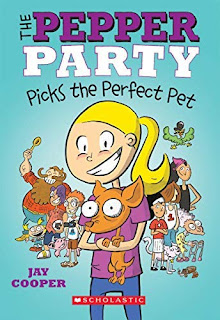 Annie Pepper has her heart set on adopting a Chihuahua in need. But none of the Peppers can agree on the perfect pet, and they're not above sabotage to get their way. Soon they end up with a heartbroken lovebird, the tarantula that ate San Pimiento, a prissy French kitty, and a house full of chaos! Who'll win the clash of the creatures?

This is a fun, quick read about a family with the last name Pepper. There are a lot of them but they have never had a pet because Peppers don't do pets. When Annie falls in love with a Chihuahua at the shelter she decides to change their mind but it doesn't go as she thought it would. They end up with a spider, a cat and a love sick bird instead. Annie isn't done trying though and comes up with a tremendous idea that helps everyone out.

Adorable book that kids will find funny and interesting. Annie is someone everyone will be rooting for in the end.

Diary Of An Ice Princess by Christina Soontornvat 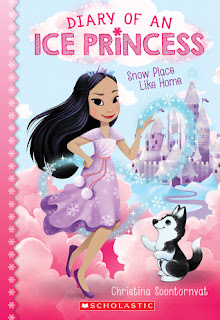 Age:
Grade:
Princess Lina has a life any kid would envy. She lives in a massive palace in the clouds. Everyone in her family has the power to control the wind and weather. On a good day, she can even fly! She loves making lemons into lemon ice, riding wind gusts around the sky, and turning her bedroom into a real life snow globe.
There's just one thing Lina wants: to go to regular, non-magical school with her best friend Claudia. She promises to keep the icy family secret under wraps. What could go wrong? (EVERYTHING!)

Lina is a special little girl. Her mom is a windtamer and dad is just a pilot. Lina hasn't harnessed her power yet. It seems to be all over the place but her moms side can all control the weather in some respect. Lina lives in a castle in the clouds with her dog Gusty and family. Lina's best friend goes to a grounding school meaning its on the ground and that is exactly what Lina wants. This school isn't just a school on the ground but it is STEM based and Lina loves Science. She wants to be like everyone else but how can the daughter of a windtamer just be like every other normal girl?

I loved Lina's voice. She is a strong role model who knows what she wants. Like my favorite parts of superhero movies, My favorite parts were Lina learning her powers. When she iced Dylan's feet to the field I laughed out loud. Kids are going to love this Sci-Fi Children's book about a princess who lives in a castle in the clouds.


Disclaimer: I received ARC copies for my honest opinion. No monetary compensation was offered.