Season 2 of the hit animated space-themed series Ready Jet Go! blasts off Monday, April 2, on PBS KIDS (check local listings) with a special week of girl-empowering episodes that will get young viewers from coast-to-coast psyched about space and science. A brand-new out-of-this-world episode will launch every weekday.

And to help ring in the new season, Ready Jet Go! creator Craig Bartlett (Hey Arnold!, Dinosaur Train) will participate in a can’t-miss Reddit Ask Me Anything (AMA) on April 2 at 3pm ET. Fans can stop by to ask Craig about the new season, what’s coming next – and anything else Redditors might want to know about. We’d love for you to spread the word about the upcoming AMA, too, and we invite you to join Craig yourself to ask him anything! Just check out the Sub-Reddit IAmA on April 2 and Craig will be there! 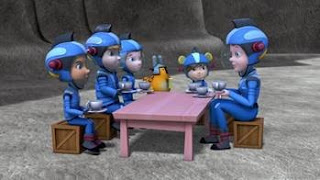 The new episodes feature the adventures of Boxwood Terrace’s very own Mindy Melendez – starting with the half-hour special, “Mindy Turns 5”. Now that Mindy’s a big girl, it’s her turn to zoom off to space with Jet and the gang for the first time, at last! And the Season 2 fun continues this summer with a space-infused new episode set to roll out each Wednesday in June and July. For even more stellar STEM-focused learning, each episode features live-action interstitials with NASA’s Jet Propulsion Laboratory astrophysicist Dr. Amy Mainzer, science consultant for the series.