5 Reasons Pre-School Years Are A Prime Time For Learning 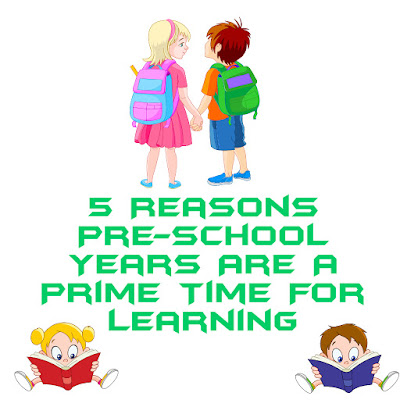 As a teacher's assistant in preschool for 1-3 year olds I can tell you that I totally agree with this. I am honored to teach some of the youngest students of our preschool. We teach science, art, math, letters, numbers, socialization, how to be kind and empathetic and more to 2 year olds. They love to learn and retain so much. They truly are sponges.

Much of the discussion about education focuses on the K-12 years, but some early childhood education experts suggest serious learning can start even earlier and pay dividends for the child in years to come.
“Young children have the capacity at a very young age to be academically challenged, and we need to educate them strongly during those years instead of waiting until they are older,” says Alise McGregor, founder of Little Newtons (www.littlenewtons.com), an early education center with locations in Minnesota and Illinois.

“Children’s minds are like sponges when they are very young. Under age 5 is the most important time for development and our best opportunity to set up children for success. If we strongly educate children at a very young age, while their brains are so pliable, by the time they reach kindergarten, their brain capacity is much higher.”

Recent research confirms that the first five years of life are particularly important for the development of the child's brain. Harvard University’s Center on the Developing Child reports that in the first few years, more than 1 million new neural connections are formed every second, building the brain’s architecture.
This growth of the brain’s network establishes a fertile foundation for learning, thus an opportunity to be better prepared for grade school and beyond, experts say. One analysis of several studies, “Impacts of Early Childhood Education on Medium- and Long-term Education,” showed that children exposed to high-quality pre-kindergarten education performed better academically in later years. Early education also led to higher graduation rates, fewer special education placements and less grade retention.
McGregor suggests five reasons parents should consider ramping up their pre-K child’s education:

• Socialization. Socialization with people other than the child’s family in a safe environment is an essential foundational element. “It’s important to introduce our children to other children and support their transition into their own friendship groups, and the earlier we do this, it helps children overcome shyness and gain self-confidence,” McGregor says.

• Personal experiences. These assist the brain’s organizational development and functioning in many situations, helping children develop learning skills as well as social and emotional abilities. “A good early-education center creates an environment where imagination, love and innovation all come together for a daily adventure,” McGregor says.

• Enthusiasm for Learning. Lessons can be given in a fun and exciting way that will encourage children to be effective learners. “Feeling inspired and excited to learn takes root in preschool,” McGregor says, “and can last a lifetime.”

• Learning respect for others. A fundamental building block for happiness, friendships and success in life starts early by learning how to share, cooperate, take turns and be nice. “By carrying on conversations, following rules, listening, accepting consequences of actions, the child learns early how to start getting along in the world,” McGregor says.

• Resilience. It’s important that early childhood educators and parents work together to develop resilience in children as early as possible. “By creating a consistent and stable environment with clear expectations and predictable consequences, children can develop skills in managing themselves and their emotions,” McGregor says. “They may experience bumps, bruises or losing a game, but this is the foundation for building coping strategies for greater challenges in life.”

“The first five years of life are the most critical,” McGregor says. “It is far easier to train a child than it is to fix a broken adult.”

About Alise McGregor
Alise McGregor is the founder of Little Newtons (www.littlenewtons.com), an exceptional child care center focusing on early childhood education with four locations in Minnesota and one in Illinois. She is the author of an upcoming book, Creating Brilliance. Also a nurse, she has a B.S. in Exercise Physiology with a cardiac rehabilitation emphasis.