How To Exude Elegance 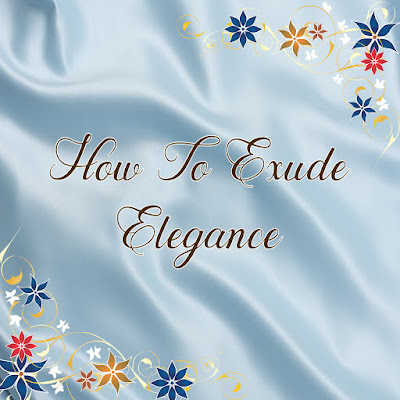 Just about anyone can be trendy or cute. The real quality that most women wish to display is elegance. Unlike trendiness or cuteness, elegance is timeless and tends to be quite the rare and precious commodity in today's world.

However, anyone who's ever tried to be elegant knows that it can be a bit easier said than done. After all, most of us can be clumsy and occasionally will say or do the wrong thing. Ultimately, elegance isn't about wearing expensive clothes or spending a fortune on your appearance. Instead, it's about the subtle way you present yourself to the world. Here's how to exude elegance.

Aspire To Be Poised and Controlled

Elegant women carry themselves with a certain poise. While many will erroneously conflate the two, poise and snobbery are not the same thing. Snobbery entails behaving as if you are better than the people around you. Poise entails carrying yourself in a way that says that you genuinely feel confident in your own skin, regardless of what anyone else might think.

One of the main factors in appearing poised is always maintaining a sense of control. This doesn't mean that you are controlling the actions of others, nor does it mean that you are presenting a phony exterior. Instead, you should aspire to be in control of your own words and actions. You don't speak out of impulse, nor do you act in a manner that is thoughtless. The goal here isn't to seem snobby and cold, but rather to seem confident and in control of your own life.

Be Kind and Warm

Remember, your goal isn't to come off as cold or snobbish. Instead, elegant women always seem kind, warm and inviting. They don't exclude people from conversations and they're not preoccupied entirely with themselves. When they have conversations with people at social gatherings, they ask questions instead of just babbling on about themselves.

Elegant women are also charitable and giving. If you really want to exude an aura of elegance, getting involved in charity work is a wonderful idea. While financial contributions are wonderful, there's nothing better than actually volunteering your time. Charities like the Sing for Hope organization accept applications from people who want to volunteer.

While elegance has more to do with personality than it does with fashion, what you wear still matters. Elegant women always look well put together. They care about what they wear, but they aren't slaves to trends. Instead, they favor dresses and pieces that are timeless, feminine and classy. You're more likely to see them in a flattering little black dress than you are to see them in an ill-fitting sequined number.

This also extends to the other little finishing touches of your overall look. When it comes to makeup, ignore the heavy trends that dominate the tutorials you see on social media. Don't bathe in cheap perfumes, but rather spritz yourself very lightly with a timeless fragrance. Elegance isn't about being showy or trying to attract the eye of every person in the room. It's about all the subtle little touches and the manner in which you carry yourself.

It's not easy to cultivate elegance, but if you follow this guide, you can improve how elegant you appear to the people around you.