Surgery Is Over And My Heart Is Healing

This morning Goddess had surgery on her hand. You can read what happened here. Not a big surgery but still the first time she would be put under and I was very nervous.

Teach carried our baby girl into the surgical area and I filled out the necessary forms giving a bunch of strangers permission to take care of my baby to the best of their ability. 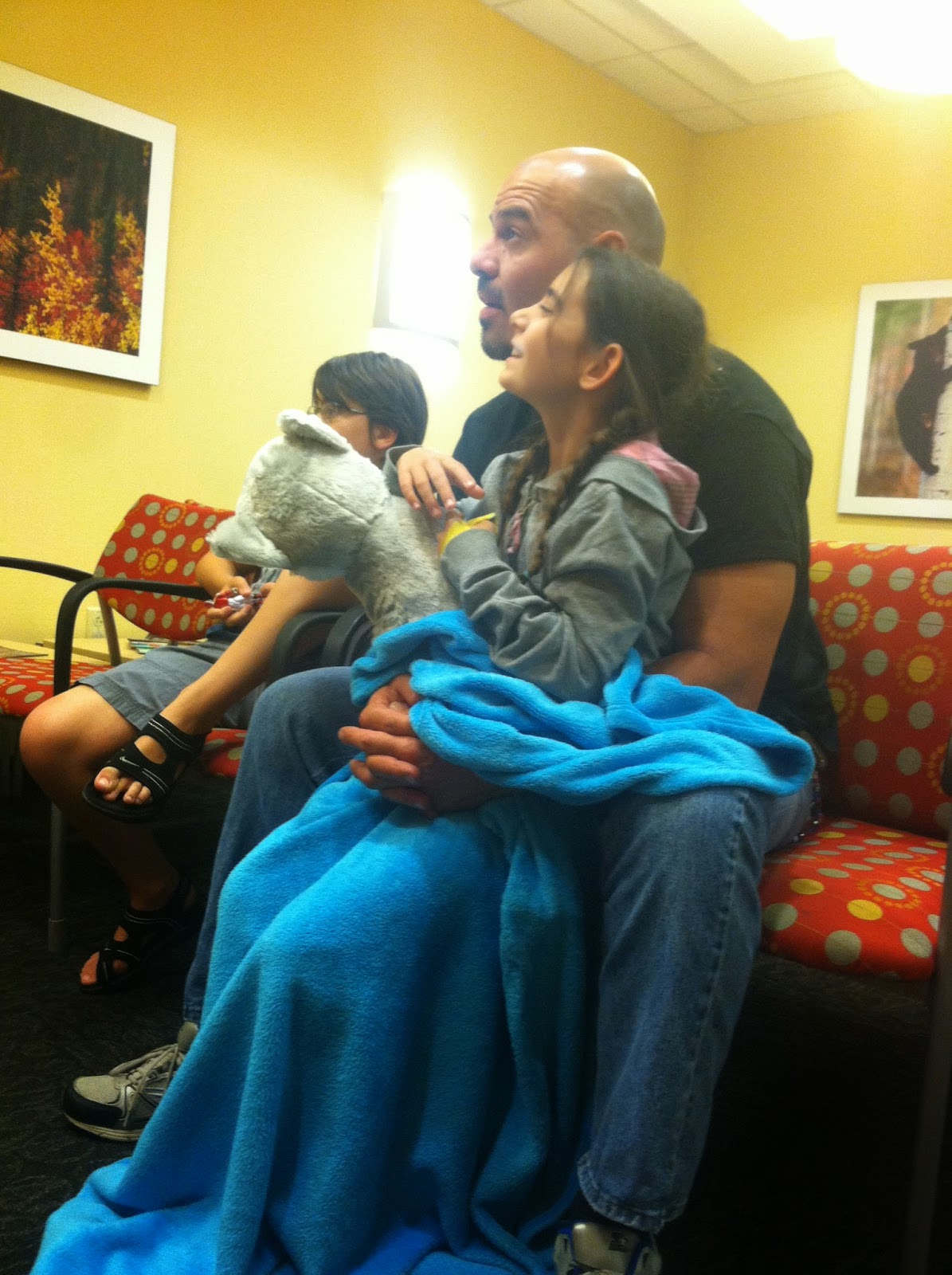 We sat for about 15 minutes and then Goddess and I were called into pre-op to start the paperwork in there, get her vitals and get her changed.

Teach and Handsome joined us about 15 minutes later to sit and help hold and cuddle her while she got her IV. It was awful and I wanted to just push everyone away and tell them to stop but they were so good with her and I knew it had to be done.

It took a while for the needle to get where it needed to go and watching the nurse fish around my babies vein while she cried was just terrible.

After the IV was in, she got some medicine that made her very sleepy and happy. It was strange to watch her change but I knew it would help her relax. 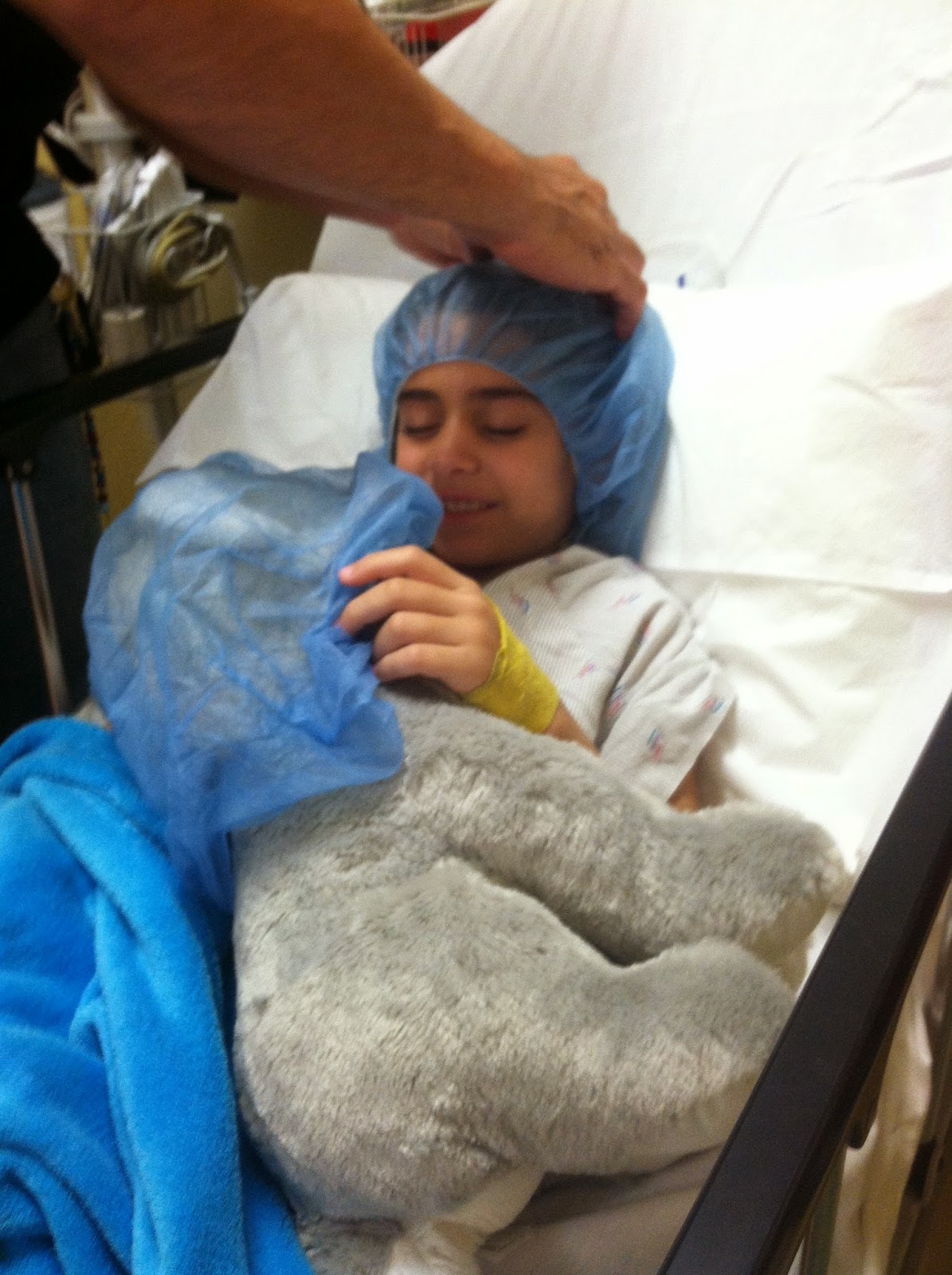 She kept smiling and told me she was tired. They put a surgical cap on her Wolf and her brother asked to wear one and a mask. 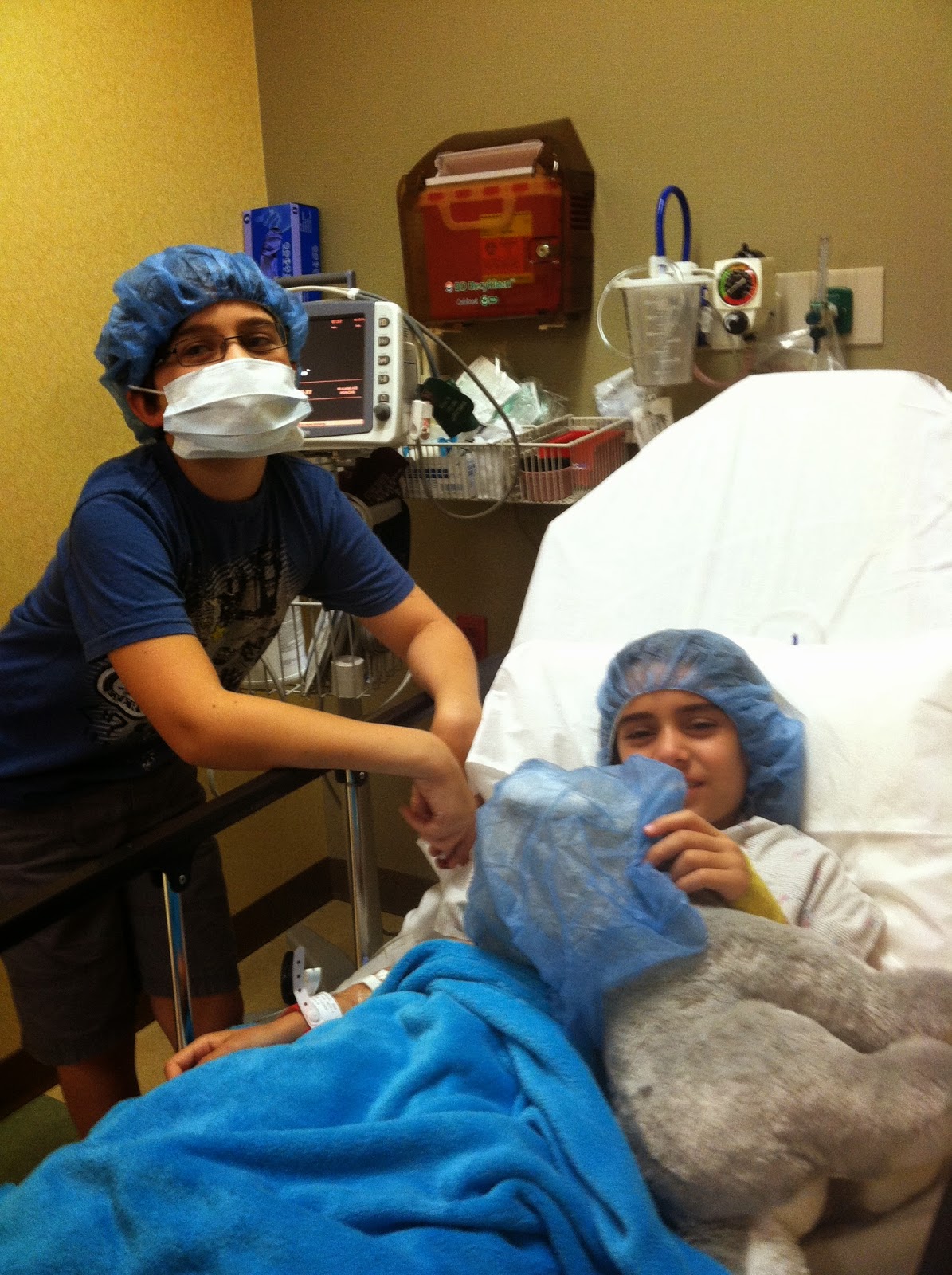 The doctor came in and we all shook hands.

I put on my Stay Puff Marshmellow suit which thankfully no one took a photo of and followed the staff into the OR behind Goddess who was completely fine at this point. It was getting harder for me to take a deep breath but like a good mom I stuck like glue to the nurse who had her arm around my shoulders and kept telling me I was doing a great job.

They asked Goddess to move to the operating table "bed" and she did her best with the drugs and IV and eventually made it to the pillow they kept pointing to.

I didn't see them strap her down but they told me that her head, arm and legs would be strapped down. They held up a pink mask that smelled like cherry and asked if they could put it over her face. She said, No I don't want that. She never stopped smiling. Just pushed away. They kept saying look at that smile but as she said no the anesthesiologist was giving her another shot of something and eventually they got it closer and closer to her face. Her eyes closed in one minute and they asked her to open her eyes very wide, told me she was out and lead me away carrying her blanket and wolf.

Handsome and Teach were waiting for me and asked how it was. I don't remember saying anything other than it was weird to watch her go to sleep.

They headed to breakfast and I sat down texting Goddess' Godmother and my girlfriend Clary. Before you knew it, 15 minutes later the doctor is standing over me with an x-ray telling me she did great "no blood was spilled" and that the pin was in place. He mentioned how far it had been moved and something about when he would see her again but I don't remember.

The waiting room asked questions about her age and the wolf with the mask and surgical cap. Eventually I got to walk in and sit with her.

It took forever for her to wake and when she did she told me that "I had woke her from her beautiful nap".

She is great and I am getting better.

UGH..the pain of being a mother in love with her kids.