Can You Tell I Love This Movie? + Giveaway

I know this is like my 888th post about Water For Elephants but I loved it so when the studio asked if I was interested in running a giveaway, I jumped at the chance to share with my readers.
LIFE IS THE MOST SPECTACULAR SHOW ON EARTH 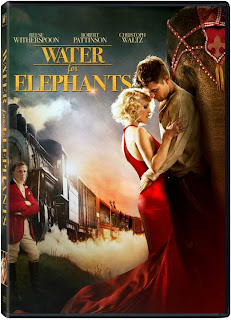 The Giveaway:  One lucky winner will receive a copy of Water for Elephants on DVD
To Win:


Mandatory Entry.  If this is not followed, none of your extra entries will count. Follow Maria's Space on Facebook and leave a comment on my wall and below by Midnight, November 7, 2011.
For Extra Entries:
*Leave a little love on Water for Elephants Facebook wall.
*Blog about this giveaway and leave me the link for (3 extra entries) (each entry must be separate).
Follow Maria's Space on Twitter
*Subscribe to my newsletter/email (3 entries) (each entry must be separate)
*Follow my blog (2 entries) (each entry must be separate)
*Follow me on Networked Blogs (2 entries)
*Tweet (leave your link) (can be done daily)
*Enter another giveaway on my blog and let me know which one.
*Add me to your blog roll and leave the link (3 Entries)
*Add my main button to your side bar

*Open to US only.
Disclosure: I am hosting this giveaway for
20th Century Fox who provided the review & giveaway product.
I received no monetary compensation.