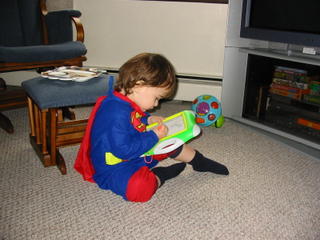 As I sit here typing up the words my little man (29 month old son) says for his speech therapist I am wondering if this is not a total waste of time. She started working with him on Monday and will be here again tomorrow. This all started because some folks that I used to hang with told me that he needed to be evaluated (not in the nicest way) to see if he qualified for Child Services due to his lack of responding to THEM. Whatever! Initially I was pissed then I figured if the services were free I would have him evaluated and take it from there. He was evaluated and qualifies for Special Instruction and Speech. I personally think they have to have a certain amount of children enrolled in order to keep the program going since it is state funded but that's just me.

He says; cheese, mama, baby, car, ball, book, arm, eye, hi, bye, Elmo, Wiggles, meow, up, ok, move, come, see, cookie, apple, eat, sissy, purple Gween (green), Bwoo (blue), Yelwow (yellow), baf (bath), milk (ilk), remote (moe), yogurt (burp-burp), balloon (bwoon), pumpkin (pumpky), outside (owside) and orange (owange), he also says: I'm ok, come on, I want ____, Let's go, I went pee-pee, I'm going to Mama, and I went pfff. I don't know and I am not an expert but I don't think this is bad. They also want him to work with scissors and use a fork and spoon. I find a lot of things they say really annoying but I am willing to go along with it as long as he benefits and I see results. The speech therapist/and the Special Instructor are going to hate me because I challenge them often. Like the speech therapist wants me to call a banana a nana. J calls it a balalala. I have been calling it a banana for 2 years and feel that changing it to nana is counter productive and I can't even try to get myself to say nana because it is silly. If he was to call it nana on his own I would have no problem with that, but to teach him nana seems like a regression to me and confusing for him. How could I change the name of it after calling it a banana for 2 years. Give me a break! She also taught him to hit his chest and say "me" when he wants something. I have no problem with that but she wanted me to have him say "me eat" when he wants to eat. Ummm...no, can't do it. What is his name Tarzan?! I told her that it was improper English (which I knew she knows) and I refuse to teach him incorrectly. It just makes more sense to do it right from the beginning. I guess time will tell.