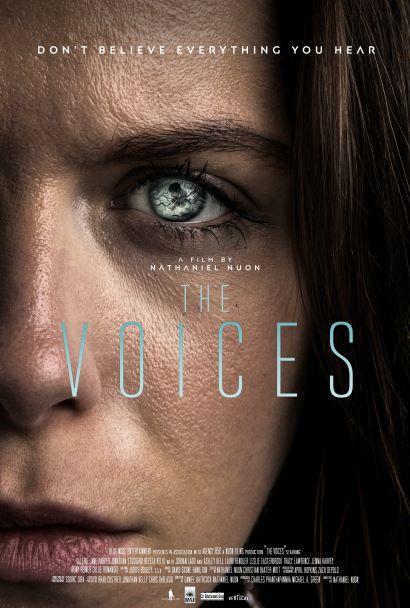 Ashley Bell, Jordan Ladd, and Leslie Easterbrook star in this spring’s most unnerving new horror film.
From Vertical Entertainment, and award-winning filmmaker Nathaniel Nuon, hear The Voices this April.
After visiting her father's grave, Lilly and her mother are involved in a terrible car accident leaving Lilly orphaned and unable to see. In her youth, she struggles with her blindness and begins to hear voices. Unbeknownst to her they don't belong to the living. After years of learning to cope, Lilly is now happily married with a baby on the way. Lilly soon discovers her unborn baby has become a vessel a second chance for souls stuck in limbo to be re-born. She only has until the baby's first heartbeat to decide which soul will be re-born through her. Now the voices she heard in her youth have returned, clamoring for the chance to come back. Among the voices, she befriends the spirit of a little girl tied to a years-old cold case. Lilly finds herself in a desperate struggle with the girl's murderers and the souls vying to be born again.
The 411:
I have watched some bad horror movies. This was not one of them! Lily has suffered more trauma than anyone. She is blind and orphaned. She starts hearing voices and doesn’t realize that these voices don’t belong to the living.  The synopsis doesn’t do the movie any justice. I loved the main character Lily. Lily now a psychiatrist is helping a little girl who lost her mom. This scene takes us into how Lily lost her mom. We learn a lot about Lily in flashbacks,
As a child everyone assumed Lily was speaking to imaginary friends. Her doctor gives her headphones to drown out the voices. She hears voices all the time and since she is blind doesn’t know they are not really there. She meets a little girl who Is looking for her cat, we can see she is an undead based on her clothes, Lily just hears a little girls she is trying to help.
One of Lily’s patients tells her that she needs Lily to pick the soul of her recently deceased son before Lily hears the heartbeat of her own unborn child Lily’s. Suddenly every dead walker wants to be Lily’s unborn child.
The Director didn’t spend enough time on Lily’s aunt’s illness and I wondered why Lily forgot all the voices she heard as a child and young adult to not realize that this is what was happening to her again but I guess we wouldn’t have a movie then.
It was enjoyable.
Valerie Jane Parker (Wrong Turn), Jenna Harvey (You Might Be The Killer), Jonathan Stoddard (The Young and the Restless), and Rezeta Veliu (Girls), star in a film directed by Nathaniel Nuon , and written by Nuon and Daniel Hathcock.