Is It The Shoes Or Is It The Boy? Golden Shoes A Movie Review


The Greatest Goal is Believing. 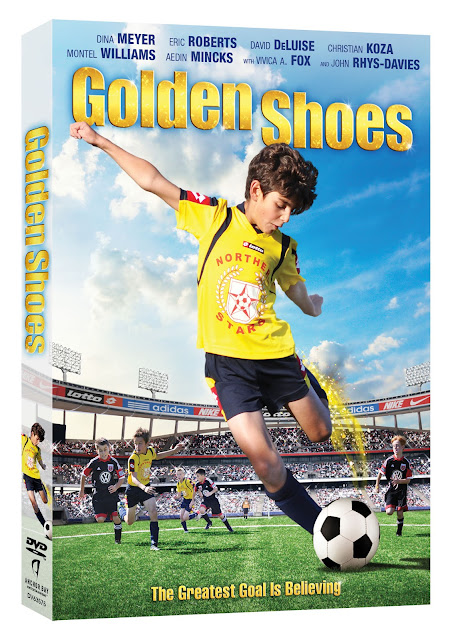 A Feel-Good Movie for the Whole Family
Debuts on Digital HD Sept. 25 & on DVD & On Demand Oct. 6

As long as he could remember, eight-year-old Christian Larou (Christian Koza) dreamed of being a great soccer player like his idol, Cristiano Ronaldo. When his father is deployed to Afghanistan and his mother is hospitalized, he pours himself into the game he loves. With the help of some very special shoes, can Christian lead his team to the championship, inspire an entire nation, and bring his family together again?

Golden Shoes will be available for the suggested retail price of $19.98.   To learn more about the film, please visit www.goldenshoesmovie.com.

This isn't just a movie about soccer but about:
In Golden Shoes a boy and his mom are waiting for word on his dad who is away fighting in Afghanistan. They haven't heard from him for months but mom is doing the best she can to keep the home fire burning and being both mom and dad to her son 8 year old Christian.

Christian wants to play soccer like his idol Cristiano Ronaldo. He watches him play and wishes he could play just like him. His mom tells him he can be whatever he wants to be.

When she is injured in a car accident the person on the Emergency List, a neighbor played by Eric Roberts who is a single dad with two boys on Christian's soccer team is the guy in charge of Christian.

He brings Christian to get new "boots". Well, old, dirty, free "boots" is what he asks for. He doesn't want to spend any of his money on this boy he doesn't like.  Montel Williams plays the shoes guy and he gives Christian some muddy old soccer "boots". Christian can suddenly play like a pro and leads his team to victory after victory, getting front page news and local media coverage which catches the eye of Washington. The President swears to find this boys father and send him home!

What I loved most is wow...there are a lot of actors in this movie. Check them out here

This is a feel good movie except when you literally want to punch Eric Roberts in the face. He is so mean. This little boy's father is away and his mother is in a hospital but this guy has this kid sleeping in the basement and tries to steal his shoes every chance he gets which will also have his son's team losing. I don't get it. There was really no reason for him to be mean other than he is raising kids alone.

The other neighbor played by John Rhys Davis who starts out being crotchety ends up being Christian's "angel". I love that.