Interesting And Worth A Watch: The Churchmen #churchmen 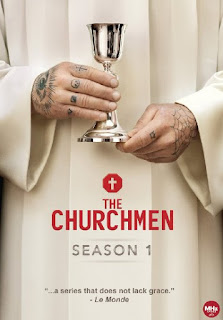 In this intense hit drama The Churchmen (Ainsi soient-ils), five young candidates for the priesthood arrive at Paris' Capuchin Seminary to begin their training. They come from wildly different backgrounds - Jose, a murderer just released from prison, Yann from an idyllic upbringing in Brittany, Guillaume from a dysfunctional family, Raphael from the stratosphere of privilege, and Emmanuel, on the run from a secret he can't even admit to himself. As they prepare to take their vows, each will see their commitment to the cross tested, and whether they can withstand temptations from outside the seminary walls and from their own hidden passions. They also have to find their way through an aging institution fraught with its own weaknesses, where the discord between seminary head, Father Fromenger and the ambitious Bishop Roman, reaches all the way to the Vatican and could rock the strongest faith.

I had no idea I would enjoy this so much. It is in French with English subtitles and focuses on five men who have entered the Seminary to eventually become priests. It also focuses on a parish priest Father Fromenge.

The show while obviously religious based doesn't cram anything down your throat. The religion, church, saint statues, and masses all act as props to the scene, they are NOT the scene.  The show is well done, unlike anything on American TV right now. It is raw, well acted, well scripted, poorly lit but that adds to the story line as well.

There are so many likable main characters and secondary characters that the storyline movies quickly.


What I find most interesting is how much conflict there is after all these are just people, as a catholic we tend to forget that and see them sometimes as deities, they are men and feel, speak and think like men. Sometimes they don't agree, sometimes they have to defend themselves, sometimes they lie, sometimes they argue, then ask for forgiveness.

Well worth a watch!