Today I watched my son run into school for the 1,000th time and every day I am reminded of how the cruel world will change who he is one day. 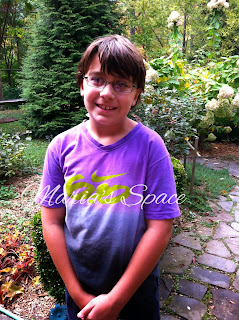 Everyday my beautiful son hugs me good-bye as he runs toward school with his bag pack on his back and his side way hat because he thinks it makes him cool. His last words are always "I love you, see you later Mom." I work in his school so I see him a few times a day. Whenever he sees me he runs over to hug me while his too cool for school classmates smirk at each other and laugh at him. He doesn't notice but I do. I see their meanness come out more often than not as they make fun of his run, he laugh, his hugs. They think he is odd, different, crazy, and weird. I hear what they say, I see how they treat him and thankfully he is oblivious to their insults. I guess it is a way for them to share a moment of camaraderie with each other. Let's all make fun of the weird boy. He is so far from weird and just wants to be like them. He thinks they are all cool. He thinks they are all funny and he wants only to be their friend. He wants to be like them. Yet, friendship is the last thing they see when they think about him.

My heart often breaks as I watch how they speak to him. It's as if his feelings, thoughts, comments don't matter. He is non-existent in their world yet he would defend any of them if they needed him. If someone gets hurt, loses a game or seems upset he is the first one to ask if they are OK offering a hug or a pat on the shoulder. No, they are 11 and don't want his hug. They get offended and quickly snap "no". He is smiling and thinks he has done something so kind and he has. He is being empathetic, caring and aware but they don't want him to touch them. They may catch whatever it is they think is wrong with him.

When I notice him asking someone if they want a hug or standing too close to someone, I remind him that people don't want hugs. I try to get him to high five me so he is not made fun of but is that what I should be doing? It kills me to do it because I love his hugs. I have become one of the cruel people in the world who is forcing him to change. His mother! I do it because I want to help him but part of me wonders if I should just let him be. They are going to talk about him whether he does it or not. So maybe I will just accept the hugs and enjoy them while I can because it is inevitable, he will change.